In the last 7 decades, there has been much interest in preventing dental injuries that occur during participation in sports.1-16 Teeth can be fractured and/or displaced by direct blunt force trauma or by a blow to the mandible that crunches the mandibular teeth traumatically against the max­illary teeth. Typical sports-related dental injuries in children and teens are shown in Figure 1.

When instructions are followed meticulously, the boil-and-bite (store-bought) mouthguards can also protect young athletes from sports-related dental injuries.5 These are often used when the expense of a vacuum-formed mouthguard made by the dentist or dental laboratory is prohibitive to the parent/guardian, or when a mouthguard is needed that can be rapidly generated in the family kitchen. However, the ability of parents and young athletes to fabricate boil-and-bite mouthguards varies greatly.

In some instances, a vacuum-formed mouthguard, or even a boil-and-bite mouth-formed device, may not be available. This can be due to expense or practicality. A custom mouthguard may be the most ideal, but for a child who is rapidly growing, and/or experiencing ever-changing tooth positions due to ongoing orthodontic treatment, a custom-formed device will usually not fit for an extended time period. Children and teens also frequently chew up their mouthguards during use, or lose them on the field or elsewhere. Continual replacements of these custom guards can be expensive and inconvenient for the parents.

What can be used if a coach of a children’s field hockey, soccer, baseball, or basketball team has a number of players show up with no mouthguards, and the wise decision to use tooth protectors is also a mandatory one? What tooth protector is available when a child goes skateboarding, plays in a neighborhood basketball court, or in a touch football game, or has just been fitted with full-bonded orthodontic hardware which will be moving teeth such that custom-fitted mouthguards will not fit soon after?21,22 And what kind of mouthguard can a dentist give to a patient who just had injured teeth splinted into place, but insists on returning to the playing field?

In cases such as these, a tooth protector is needed that meets the following conditions:

TOOTHSHIELD
ToothShield is marketed by PRACTICON as a patented tooth protector and impact deflector (Figure 2). It is manufactured (in the United States) from a thermoplastic elastomer; the same type that is used for pacifiers and nipples for baby bottles. The design includes posterior compression pads that compress the device inward, against the buccal surfaces of the posterior teeth, or attached orthodontic hardware (Figures 2 to 4). Inward compression accommodates smaller mouths, facilitated by v-shaped notches in the horizontal bite plane (Figure 2). Likewise, the notches allow for expansion, so the ToothShield spreads outward to fit larger arches. The internal aspects of the lips help stabilize the tooth protector in the anterior region, and a tilting maxillary anterior flange adapts to the labial vestibule by maxillary lip compression (Figures 3 and 5). The flange can be reduced in height with scissors, if it impinges the depth of the anterior vestibule in smaller mouths (Figure 6). In addition, a tether can be inserted for helmet attachment, if needed (Figure 7).

Informal questioning of children and teens using ToothShield have elicited only one complaint: as with any non-custom mouthguard, it can be awkward to speak with the device in place. However, the tongue and mandibular lip can stablize the ToothShield with the mouth slightly opened in order to accommodate shouting to a teammate or conversing on the field of play, as needed.

CLOSING COMMENTS
Custom-fitted mouthguards are undoubtedly the optimal way to protect teeth from traumatic impact during sports activities. However, such mouthguards are not always available or affordable. ToothShields are adaptable to most children and teens, even to those wearing fixed orthodontic appliances, and can work as an acceptable alternative, when needed.

Disclosure: Dr. Croll acknowledges financial interest in ToothShield by virtue of a patent licensing and royalty agreement with PRACTICON.

Mouthguard May Improve Athletic Performance in Addition to Protecting Teeth 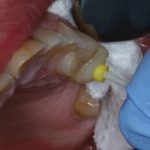 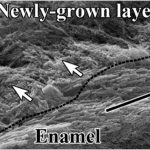