A healthy 21-year-old presents to your office with a history of trauma to the anterior maxilla resulting in the loss of teeth Nos. 7 and 8. The patient desires fixed replacement. You provide a treatment plan for a 4-unit bridge utilizing teeth Nos. 6 and 9 as abutments. Executing Schillingburgs preparation principles and the talents of an experienced ceramist, you could achieve an excellent result with an expected longevity of 15 years.1 The math suggests 3 more fixed prostheses over this patients life span. Factor in the 11% of needed endodontics on prepared abutments, and it becomes rather plausible that the 4 units could grow with similar complications over time. Add to the equation the life sentenceâ€š of floss threaders (which everyone uses, don’t they?) and potential periodontal compromises, and the overall picture reveals itself to be less than desirable.

Could there be any better argument to support less is best? Most patients have very little idea of what they’re getting into when you bring out the prep kit, and not all of us have a world-class ceramist down the hall.

This article will contend that preparation of virgin teeth to attain fixed replacement should be a last scenario. At the very least, appropriate time should be provided to elucidate the pros and cons of available treatment options. It illustrates the use of significant bone augmentation through the utilization of a symphysis graft. Although the surgery and restorative process discussed in the article added considerable time and cost, the results were appreciably aesthetic, and the conservation of adjacent teeth that remained unblemished by high-speed mutilation was proudly embraced.

A healthy 23-year-old male presented to the office for a consultation regarding replacement of the maxillary right lateral and central incisors, which were lost to an accident 4 years prior. The patient had worn an acrylic flipper as a replacement prosthesis (Figures 1 through 4) and revealed a negative medical history with no contraindications to dental treatment.

A clinical exam revealed a completely intact dentition with the exception of teeth Nos. 7 and 8, which were lost in an accident. The patient had also sustained a right orbital fracture. Periodontally, there was no pocketing, excellent bone levels, and healthy pink gingiva. Prior restorative was minimal, and the exam revealed the need for 3 small restorations.

The edentulous area of teeth Nos. 7 and 8 had undergone significant resorption, resulting in insufficient width for implant placement. According to Misch, it would be a classification.3

The patient was given the option of conventional fixed bridgework. (It is noteworthy that the patient had a minimal dental history.) The potential abutment teeth, Nos. 6 and 9, were noncarious  and unrestored. Significant time was spent reviewing the pros and cons of each option.

A conventional crown and bridge offered the following pros and cons.

Pros: no involvement of additional teeth; no endodontic complications; enhanced periodontal prognosis; patient-friendly hygiene (the patient can floss!); and asthetics equal or superior to fixed prosthetics

After 2 consultations and a thorough review of options, the patient opted for implant therapy.

As reported, the review of the patients medical history revealed no contraindications to treatment.

A panorex, CT scan, and a diagnostic wax-up were considered key elements to a predictable outcome. The radiographs would generate abundant information for the planned chin graft to augment the patients present bone. Additionally, Valley Dental Lab of Stillwater, Minn, has patented an effective treatment-planning tool in its diagnostic wax-up models known as Master Diagnostic Models (Figure 5). In this particular case, it enabled us to anticipate the size of the graft needed in stage-one surgery.

Surgery One: The Symphysis Graft

This surgery would use mepergan fortis and diazapam 10 mg with N2O for conscious sedation. Local anesthesia included 2% lidocaine and 0.5% bupivicaine (1:200,000 epinephrine). Preoperative 1,000 mg amoxicillin and 9 mg dexamethazone and vitamin C 500 mg 3 times a day (starting 5 days prior to surgery) were also provided.

For the donor bone, an incision 1 cm apical to the mucogingival junction from first bicuspid to first bicuspid was accomplished. When attached gingiva exceeds 5 mm, the incision can bisect the keratinized tissue.5 The symphysis was exposed. (It is noteworthy that surgical scissors, as opposed to a surgical blade, were used distal to the cuspid to release the mucosa to reduce potential nerve damage.)

The size of the osteotomy is determined by both the required volume and the existing donor anatomy. The superior osteotomy is made perpendicular to the cortical plate (to further protect the teeth) 5 mm below the incisor apices.6 The depth is through the outer cortex but without perforation to the lingual cortex. The length is normally between the roots of the cuspids. This further reduces the incidence of mental nerve paresthesia.7

A 12 x 24-mm area was outlined with a 701 fissure bur, followed by a SHEE4 bone chisel and Cottle-4 (Salvin) to separate 2 half-block grafts. Additional cancellous bone was also retrieved by curettage with surgical curettes. The defect was then filled with a resorable hydroxyapatite and closed with 2 layers of interrupted 3-vicryl sutures.

The block graft was placed in sterile saline and then contoured to remove all sharp edges and to inlay to the recipient site (previously prepared to receive the inlay block graft). Two 1.6-mm, 12-mm-length self-tapping titanium bone screws were used to stabilize the graft. Discrepancies between the host site and graft were filled with additional autologous bone procured with rongeur and chisel once the block had been removed, along with Pepgen-15 and N-300. This was covered by a Biomend resorbable collagen membrane. Sharp dissection of the periosteum permitted tension-free closure with 4.0 vicryl sutures. A pressure dressing was used for 24 hours to minimize bleeding and edema and to help adapt the mentalis muscle (Figures 6 and 7).

A fixed transitional prosthesis was selected for the first phase of treatment. A modified, resin-bonded retainer was fabricated (modified in that the retainer was reduced in size and thickness to accommodate the patients occlusion). It served the patient 8 months without the need for rebonding, without any load to the graft, and was reasonably aesthetic (Figures 8 and 9).

During the final 3 months of therapy, it was decided that due to the need for more frequent visits, an acrylic flipper would best serve to expedite treatment. This author is aware that other means of provisionalization could have been utilized, including immediate load of the implants at the placement visit. Eight months following, implant placement was scheduled.

A full mucoperiosteal flap with 2 vertical-releasing incisions from the distal of tooth No. 6 to the distal of tooth No. 9 permitted adequate access. The 2 bone screws were removed, and the previous symphysis graft was sufficient to place 16-mm 3.25 implants and 16-mm 4.3 implants in the area of teeth Nos. 7 and 8 respectively. A surgical template was created from an acrylic shell with no lingual (permitting drill access), developed from the approved provisional. The bone was D 2-0 quality, and an uncovery was scheduled 12 weeks out (Figures 10 through 12).

At the uncovery, it was determined that small-volume tissue defects and some surface irregularities would detract from the final aesthetic outcome. Specifically, one of the soft-tissue augmentation goals would be to create the interdental papillae between the lateral and central incisors. A subepithelial connective tissue graft would be the augmentation procedure of choice.

The graft was harvested from the palate utilizing a partial-thickness donor pouch (Figures 13 through 15). A partial-thickness incision was utilized at the recipient site, and a curvilinear beveled  flap was employed. Adjacent attached gingiva was de-epithelialized, which helps immobilize the graft at the periphery. The harvested graft was sutured, and the flap was coronally advanced passively, largely due to the flap design.

Conventional prosthetic protocol was followed to fabricate 2 single cementable crowns over abutments. The perimucosal extensions were removed, and straight abutments for the transitional crowns were inserted. These were not torqued since they will eventually be replaced by final abutments. They are modified outside the mouth. This appointment is significant in that the provisionals should serve as the blueprint for the final restoration. Final decisions about the need for custom abutments or further soft-tissue alterations are made at this appointment.

The provisionals should ensure marginal integrity and establish appropriate contact points and soft-tissue contours. Occlusion on the provisionals was designed to be nonloading.

Four months after the implant surgery, the definitive porcelain-fused-to-metal restorations were delivered and cemented. A panorex and periapical radiographs confirmed complete integration. The final restorations revealed a reasonably aesthetic result without compromise to the patients natural dentition (Figures 16 through 20).

Dr. Rasner is a general practitioner from Bridgeton, NJ. Despite practicing in one of the more economically challenged areas in the country, his practice has evolved as a model of enduring success. Combining clinical excellence, extraordinary customer service, and visionary leadership, he has created a dream practice. He lectures both nationally and internationally and can be reached at (800) 337-8435. 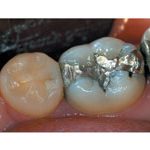 Next post Restoring Anterior and Posterior Aesthetics and Function
0 Shares