Patients with failing natural dentitions face a bewildering variety of treatment choices. The standard of care protocol for a minimally supported prosthesis calls for 2 implants with o-ring abutments to support a complete denture, and the possibilities expand as the number of implants increase in any arch. The implant-supported overdenture requires an optimal number of well-positioned implant fixtures firmly integrated into the bone of the maxilla or mandible. Treatment-planning requirements can be altered if 1 or more implants fail to integrate, necessitating a change in the design of the projected prosthesis. The restorative dentist and the technician must work harmoniously to deliver the optimal service for the patient being served.

The following is a case report in which treatment consisted of a bar-supported overdenture and a fixed overdenture.

A middle-aged female patient presented with a chief complaint of mobile and infected teeth. She had seen a periodontist and become disillusioned with the prospects for her teeth and had decided she wanted implants. There was an active infection facial to the upper left central incisor. The lower anterior teeth were extremely mobile, but the lower left residual molar and 2 molars on the lower right side were reasonably sound. They could be considered for interim retention but ultimate removal. All of the remaining teeth were periodontally unsound and slated for removal (Figure 1).

In consultation with an implant oral surgeon a treatment plan was designed for removal of the designated teeth and an upper anterior frenectomy, with immediate placement of an upper transitional denture and a lower partial denture with acrylic support from the 3 retained molars. In late 2000 the remaining upper teeth were removed. The lower teeth were removed in February of 2001, and 5 months later 5 Nobel Biocare Replace Select implants were placed in the mandible and 4 were placed in the premaxilla.

Denture adjustments and relining were provided over several visits. The patient then transferred to work and live several thousand miles away and was absent for more than 2 years.

The upper left canine implant did not integrate and was removed at the stage-2 uncovering of the other fixtures in late 2003. The remaining 8 implants were fully integrated, and after placement of the healing abutments, gingival tissue healing and contour was ideal.

As can be seen in Figures 2a to 2c, a conventional prosthetic approach was taken with denture teeth set in wax for trial aesthetic and phonetic confirmation at the initial working vertical dimension. An upper master cast with soft-tissue model of 3 Nobel Biocare Replace Select RP abutment analogues and 3 Nobel Biocare Multiunit titanium abutments were fabricated. At the try-in appointment the cast gold bar was present. The bar was extended in anticipation of replacement of the failed implant in the upper left canine region.

Putty indexing resulted in the final denture base with teeth in wax at the try-in, prior to processing (Figure 3a). The completed denture surface shows 2 distal ERA attachments (Sterngold) and Bredent VSP GS Clip (Figure 3b). The overdenture with a partially open palate is shown in the mouth in Figure 3c.

The lower transfer copings were placed and indexed with GC Pattern Resin (GC)  and a pickup impression secured. The remaining lower right molar will be reduced on the mesial to access the distal implant on that side (Figure 4a). The inside of the resulting impression revealed 3 retained molars to be removed prior to the verification index trial (Figure 4b). The lower master working cast with soft-tissue model  was fabricated (Figure 4c).

As shown in Figures 5a to 5c, the verification index of titanium nonengaging abutments in Pattern Resin confirms the alignment and passive seating. Black lines on the index indicate the desired termination of the framework support. The framework pattern in white and custom-milled titanium Procera framework are shown. The pattern was made in the local laboratory and sent to Sweden with the master cast, where a CAD/CAM duplicate was milled from a solid block of titanium. The titanium dioxide coating on the pattern allows the laser to scan the form for duplication. The actual framework in the mouth confirms passive seating.

As shown in Figures 6a to 6c, the Procera frame was tribochemically coated (Rocatec-Plus, 3M ESPE) for retention of the denture resin. Vita Physiodens (Vident) teeth were Ivocap-processed (Ivoclar Viva-dent) in acrylic prior to polishing. The overdenture on the working cast revealed accessible abutment extensions from the implants to allow for ready cleansing. Abutment screws coated with a film of medical grade silicone were torqued into place, and cotton fibers covered the screw access openings, followed by gutta-percha and composite filling of the oc-clusal openings. The occlusion was checked and adjusted.

The maxillary bar-supported overdenture and lower fixed overdenture prostheses de-scribed in this case report resulted in aesthetics and phonetics that gave the patient increased social confidence and the comfort of being able to say “I can eat anything” (Figure 7).F

The author is grateful for the technical support of Uwe Blaszak, RDT, of Vogue Den-tal Studio, Vancouver, for the fabrication of the illustrated prostheses.

Dr. Nasedkin is a certified specialist in prosthetic dentistry, with a practice in Vancouver, British Columbia. He can be contacted at jnasedkin@telus.net. 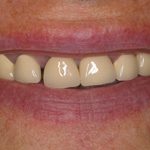