INTRODUCTION
Dental implants can be used to support a wide range of fixed and removable prostheses. When bilateral edentulous areas are located posterior to the remaining mandibular natural teeth, fixed implant partial prostheses are preferred over removable partial dentures (RPDs). However, such a prosthetic option is not always possible because of the patient’s financial status or compromised regional bone anatomy that usually requires extensive bone grafting procedures, making the distal extension RPD (Kennedy Class I) a valid treatment alternative.1-4 The common complaints associated with the distal extension RPD are lack of stability, minimal retention, unaesthetic appearance of the clasp(s), and discomfort upon loading.5 To overcome such problems, some authors have suggested the placement of implants into the distal portion of the posterior alveolar ridges with the assistance of healing abutments for support and/or resilient attachment systems for retention, when possible.6-14

Among the different types of resilient attachment systems that have been used to assist the RPD are the o-ring attachment, the extracoronal resilient attachment (ERA), the Locator attachment, and magnets. The healing abutments have been associated with complications such as pitting of the surface or loosening of the screw; and, it is not a retention mechanism, whereas the resilient attachment systems have been associated with frequent matrix activation. Furthermore, it has been advocated that implants planned for use as overdenture abutments, or as an assisting mechanism for an RPD, be placed parallel to each other to obtain a proper path of insertion, predictable attachment retention, and complete seating of the restoration.15,16 However, it is often difficult or impossible to place implants parallel to each other 3-dimensionally into the distal portion of the mandible residual alveolar ridge due to anatomic interference; ie, the submandibular fossa.

The following 36-month follow-up case report describes the design of an implant-assisted-removable partial denture (IARPD) in which 2 tooth-supported crowns and 2 screw-retained implant crowns with an ERA were used to provide a proper path of insertion, support, and retention, respectively.

CASE REPORT
Diagnosis and Treatment Planning
After receiving a maxillary implant-fixed complete denture, a 59-year-old female patient presented with the primary complaints of lacking chewing efficiency and discomfort in her mandibular interim partial denture. Her medical history was not relevant to the proposed dental treatment.
A clinical examination revealed missing posterior teeth on the right side of the mandible and, in addition, the first and third molars were missing on her left side. The first left mandibular premolar also presented with caries around a previously placed amalgam restoration.

Examination of radiographs revealed limited bone height (9.0 mm) and width (4.0 mm) at the left edentulous areas, whereas 8 to 10 mm in height and 4 to 6 mm in width were found at the right mandibular area. Periapical and furcal lesions were also found on the second left mandibular premolar and second left mandibular molar, caused by extensive caries and tooth perforation by a misaligned post, respectively (Figure 1).

At the definitive impression appointment, retraction cord (Ultrapak No. 00 [Ultradent Products]) impregnated with hemostatic solution (Hemodent [Premier Dental Products]) was placed for gingival retraction on the prepared mandibular teeth, and indirect implant impression posts (No. IIC12 [Biomet 3i]) were placed on the implant sites. A polyether impression material (Impregum [3M ESPE]) was used for the definitive impression. The implant analogs were then placed into the final impression position. The impression was boxed and cast twice in Type IV dental stone (NEW FUJIROCK [GC America]). The first working cast was left intact, whereas the second working cast was trimmed for die fabrication. Next, a resin record base and an occlusal wax rim were fabricated to the average dimensions, and an arbitrary face-bow and vertical and centric relation interocclusal records were taken. Both master casts were articulated on a semi-adjustable articulation (8500 series [Whip Mix]). Later, the laboratory prescription with the removable partial denture framework design was written, including all the elements of the final prostheses.

In the laboratory, 2 nonrotational castable UCLA abutments (No. GUACA1C [Biomet 3i]) were attached to the implant replicas and were modified together with the 2 abutment teeth by adding milling wax (Biotec milling wax [Bredent]) to provide optimal emergence profiles, contours, and occlusal form. The final wax-up was cut back by standard procedures and the working cast was placed onto the surveyor milling machine’s table (Milling Machine BF-2 [Bredent]). Immediately after, 4 parallel patrices (VS-3 Male [Bredent]) were connected onto the mesial and distal walls of the screw-retained implant and teeth coping crowns using a paralleling mandrel (Vario-Soft 3 [Bredent]). Later, the milling machine with the corresponding tools was used to create lingual arm rest seats and vertical grooves on the mesial and distal walls of the 4 coping crowns before they were sprued, invested, and cast in a high-noble metal-ceramic alloy (Olympia [J. F. Jelenko]). The fixed units were finished and veneered with feldspathic porcelain (VMK 95 [VITA Zahnfabric]).

The master cast was then relieved and blocked out with the crowns in place, and 4 duplicating matrices were inserted into the crown’s patrices. Next, it was duplicated to create an investment cast (COBAVEST [Yeti Dental]). The partial denture framework was waxed on the investment cast according to the prescription by using a prefabricated wax pattern (Wax Matrix Housing [Bredent]) and inlay wax. The framework was sprued, invested, cast in a nonprecious metal alloy (Vitallium Alloy Co60 Cr31 Mo6 [DENTSPLY]), and finished using standard procedures. The fixed PFM crowns and the partial denture framework were then sent back to the clinic to analyze the fitting.

During the fitting process, the fixed-metal ceramic crowns were screwed down and provisionally cemented into the mouth. The partial denture framework was checked and adjusted by disclosing wax (Kerr). Later, the partial denture framework with the incorporated teeth setup was clinically assessed, and the accuracy of the articulated casts and condylar inclination setting were verified. The patient’s acceptance of the aesthetics was obtained.

The partial denture framework was then flasked with standard procedures and it was returned to the clinic, along with the fixed-metal-to-ceramic crowns, to be delivered to the patient.

At the final appointment, the resilient matrixes were connected into the framework (Soft Matrixes, yellow-regular friction [Bredent]) and the removable partial framework was placed with the PFM crowns to ensure passive fit (Figures 2 and 3). The posterior implant metal ceramic crowns were inserted using a retention screw (Gold-Tite square UniScrew [Biomet 3i]) and tightened to 35 Ncm (Figure 4). The anterior ceramic crowns were cemented using resin cement (U100 [3M ESPE]). After the prostheses were allowed to set, the occlusion was checked and adjusted chairside, and the patient was instructed in the proper insertion and removal of the prosthesis.

Post-treatment therapy included evaluation at one week and 3 weeks, followed by biannual evaluation for 3 years. Each visit included an evaluation of the occlusion, taking of radiographic images, inspection of oral hygiene, and inquiries as to patient satisfaction and comfort. At the 3-year follow-up, no clinical complications, such as mobility or screw loosening, were observed. Radiographic images of both teeth showed thickening of the periodontal ligament with no marginal bone loss. The marginal bone loss at the implant sites appears to be within normal limits, with marginal bone loss up to the first thread of the implant at the 3-year evaluation period (Figures 5 to 8).17

CONCLUSION
The implant-assisted removable partial denture consisting of 2 teeth and 2 distal screw-retained implant crowns using an ERA can be an economical, functional, and aesthetic treatment option when the 2 distal implants are not placed parallel, allowing for a proper path of insertion, support, and retention.

Dr. Grageda recieved his DDS degree from the Universidad Tecnológica de Mexico (UNITEC). He received his masters degree in implant dentistry at Loma Linda University in California and his prosthodontics certificate at University of Texas Health Science Center at San Antonio. He is in private practice in Mexico City, and is a part-time professor at Universidad Nacional Autonoma de Mexico and UNITEC. He can be reached via e-mail at edgargrageda@hotmail.com.

Mr. Rieck recieved his CDT degree from Technical School Marcel Gateaux. He has worked in different dental laboratories including Perfect Smile GmbH Berlin and Asthetic Rieck GmbH Berlin. He has extensive experience fabricating removable partial dentures with attachments, galvanos, and telescopic crowns. He is currently the owner of Dental Technik Rieck laboratory at Mexico City. He can be reached online at dental-rieck.com. 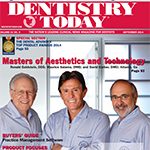