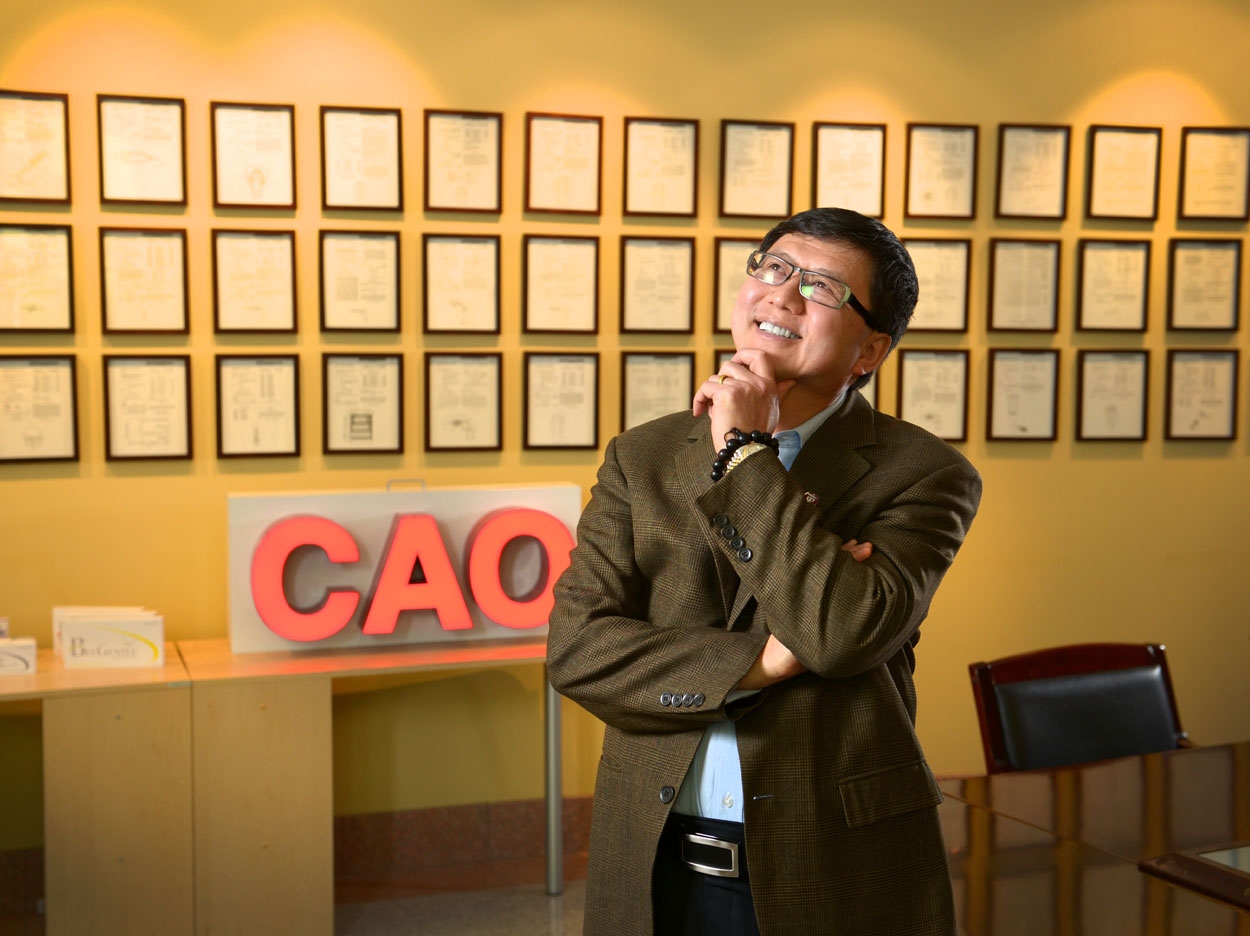 When I first came across the CAO Group at a dental meeting, I wondered how the Canadian Association of Orthodontists got involved with marketing lasers. After some quick research, I found an amazing scientist and entrepreneur, Dr. Densen Cao. I had a chance to meet Dr. Cao last year and recently decided to interview him, as his name keeps coming up in my conversations about curing light and laser manufacturers. After finishing his undergraduate studies in China, he came to the United States and received his PhD in materials science and engineering at the University of Utah in Salt Lake City. Early on, Dr. Cao worked as the coordinator of materials science at Clinical Research Associated (CRA; now doing business as CR Foundation) and as staff engineer at Fairchild Semiconductor. At CRA, he worked for Drs. Gordon and Rella Christensen, examining restorative materials, such as glass ionomers and their fluoride release, and the properties of composites and adhesives. He also evaluated curing lights, CO2 lasers, and other equipment. Dr. Cao stated, “The halogen lights of that time were bulky, emitted a lot of heat (thus requiring fans), and had bulbs that degraded rapidly in a short period of time.” This led him to begin researching the possible use of LEDs as a light source for curing. He wrote the definitive patents for these lights, not only detailing the output but also creating a variety of designs. (You can see one of the key patents, including the science of the electronics and pages with drawings of various configurations of the actual devices by clicking here.) As we talked and I told him that I read through this massive patent portfolio, he laughed and said, “I tried to think of everything.”

As his research and development took up more and more time, he left CRA but stayed in Utah and founded the CAO Group. This innovative company has become a force in creating products that could be considered foundational in every dental practice. Based on his LED research and patents, Dr. Cao introduced the first commercial LED curing light with a distribution partner. Not only was it amazing when it was introduced back in 2000, but it is still the foundation for the LED curing lights used today. Dr. Cao stated, “Almost every LED curing light in the marketplace uses and has licensed my technology.” The use of LED curing lights saves $6,000 per dentist per year on average.

A couple of years after the introduction of curing lights, Dr. Cao took his knowledge of light-emitting technology and moved on to lasers. In 2002, he invented the first compact diode soft-tissue laser. According to Dr. Cao, one of the complex issues of the early lasers was “fiber management.” As he delved further into this area, he created the disposable tip (used by many of the popular brands), battery operation, a touch screen control panel, and even the wireless foot pedal for these lasers. If you look around the marketplace, you’ll find his stamp on many of the lasers we use in our practices. The CAO Group’s own Precise SHP soft-tissue diode laser pairs with an included iPod Touch, which not only gives the dentist maximum control of the output, but also contains onscreen instructions for use, 21 procedure presets, and even training and procedure tutorials that can be used to earn continuing education credits. (Click here for more information on the Precise SHP.)

As Dr. Cao continued his work, he moved out into other areas, such as LED lighting. Going beyond dental applications, his research and patents were foundational in the replacement bulbs that, up until that time, were incandescent. This was partly due to his LED design that emitted light with a 360° beam. As we know, these new lights last many years and are great energy savers—cutting costs by 70%. Along with figuring out how to get the LED to shine in 360°, he worked on managing the heat it emitted and, although it was small, he has made it negligible.

Dr. Cao’s innovations continued into medicine, specifically in forensics, creating the Ultralite ALS Turbo forensic light. You have seen this on TV in shows like NCIS. The light uses UV and other frequencies to reveal bodily fluids, bite marks, blood spatter, gunshot residues, explosive accelerants, trace evidence of fingerprints or even fibers, and more. This product has helped solve many cases. According to a product description used in the forensics industry, the UltraLite ALS Turbo uses light interaction techniques to help reveal such evidence that might be difficult to detect against background materials and could otherwise go unseen. It can also be used on bodies both living and dead to detect subcutaneous bruising, injuries and wounds, and other DNA evidence. This product has even been used by forensic science expert Dr. Henry Lee for some very high-profile legal cases. (Click here for more details on the UltraLite ALS Turbo.)

As Dr. Cao continues to work in the lighting area, he has noticed the number of dental practices using expensive, hot, and fragile bulbs in the overhead lights. Of course, an office can buy a whole new LED light fixture, but why discard that trusty light that has served you well for years? He has been working on substitute bulbs called ClearVue that will fit into these older light fixtures but are LED-based. Dr. Cao said, “There are a lot of different configurations of light sockets, even within the same company’s units. It is a bigger project than I anticipated, but it will hopefully be ready by the end of this year.” The advantages of these substitute bulbs are many. First of all, they give off 29 BTUs compared to halogen’s 325 BTUs. Secondly, ClearVue bulbs should last 60 times longer and there will be no color/spectrum degradation during their lifetimes.

Moving in another direction, Dr. Cao again came up with a very useful process and its resulting products: he has created a wax-like material that can be pressed around teeth and can carry medicaments that “seep” into them. The first idea was to deliver peroxide from a moldable strip that covers the facial and lingual surfaces of teeth by simply pressing and molding it with the fingers, where it will stay in place. This initial product, called Sheer White, is an in-office and take-home bleaching system. In the near future, this system will also deliver fluoride, desensitization, remineralization, topical anesthetic, and even periodontal disinfection. Dr. Cao said, “There are many rinses in the marketplace for disinfection, but how effective can they be in a 10-second rinse? My system can keep the medicament closely against the teeth and tissues for an extended time for the persistent delivery of desired medicaments.”

When asked what’s next for Densen Cao and the CAO Group, Dr. Cao answered, “We already have a few hidden gems—FastFix and BeeGentle—and a couple products coming later in the year.” FastFix is a one-step porcelain repair liquid that uses no etching and no silane. This product does not need hydrofluoric acid (which we all use with extreme care) as it has its own proprietary carboxylic acid formula. BeeGentle is a topical anesthetic varnish that is visible on the tissue and stays in place, delivering tissue anesthesia for up to 30 minutes. The fact that you can actually see where the topical is placed reduces guesswork, and you do not have to swab a much larger area to be sure it is placed properly. It also has an obvious use for patients having scaling done who need at least minimal anesthetic applied. Again, you can see the area on the tissues and the 30-minute efficacy should be sufficient for these cases. As to how BeeGentle got its name, it is honey flavored.

In Dr. Cao’s rather large crystal ball is a reversible cement that will debond dental prosthetics on command by using a laser, as well as a pasteless prophy cup called Prophy Genie. There are many more products to come that are being developed and manufactured in a huge facility that contains a 100,000-sq-ft clean room that is GMP certified (ensuring that products are consistently produced and controlled according to quality standards) and is staffed with more than 200 employees. When you see the name CAO Group in your Henry Schein catalog or at a trade show (where you, too, can possibly meet Densen Cao), you might stop and give the company’s products a closer look. A lot of other manufacturers certainly have.

For more information on the CAO Group, visit caogroup.com. 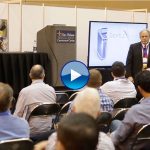 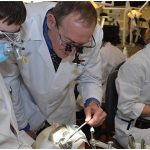