Teething Can Cause Major Problems

A high fever or other health issues are not a basic byproduct of teething.

A study analyzed 47 Brazilian infants over an eight-month span to see what other symptoms developed. During the time period, the researchers visited the children’s homes on a daily basis, took their temperature, looked for tooth eruptions and interviewed their mothers.

The information was published in the journal Pediatrics.

In most cases, there were some basic issues resulting from teething, including irritability, drooling, poor sleep and possibly diarrhea.

But many serious health problems, like high fevers or diarrhea for an extended period of time should not develop after teething. When such issues are present, teething is not the cause and the parent should take his or her child to a doctor.

The research showed that when a tooth erupted, the child’s temperature may have gone up slightly. But there was a clear distinction between the temperature rise and a fever.

The day a tooth erupted or the day after was when the minor side effects were present. None of these symptoms lasted long.

The accepted belief is that fevers and serious symptoms can result from teething but this research, along with other research, proves those theories wrong. The bottom line is that no major health concern should be considered a result of teething.

The research team was led by Joana Ramos-Jorge, a pediatric dentist at the Federal University of Minas Gerais in Brazil. 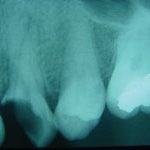