Utilizing the Concept of the Golden Proportion

Adhering to smile design principles is essential when initiating the restoration of teeth in the anterior region of the mouth. When the dentist does not use smile design guidelines, there is no blueprint for tooth preparation and restoration. In the absence of a plan, teeth may be underprepared or overprepared, leading to a compromise of the aesthetic and functional results. In addition, the laboratory technician must be provided with an adequate amount of information to allow fabrication of ideal restorations. Providing the technician with only a stone model communicates minimal aesthetic information.

In order to achieve optimal aesthetic results, the dentist must provide the technician with a plan specifically designed for each patient. This must include the proper position of the incisal edges, incisal plane, midline position, the length and width of the teeth, tissue height, axial inclination, embrasure form, line angles, and surface texture.1-3 A mathematical concept called the Golden Proportion has provided guidelines for tooth preparation and fabrication of the restorations. Application of this principle will, therefore, help to improve design, functional results, laboratory communication, and patient satisfaction. This article  discusses the Golden Proportion and its role in dental aesthetics.

This proportion can be found throughout the universe; from the spirals of galaxies to the spiral of a Nautilus seashell; from the harmony of music to the beauty in art.8,9 A botanist will find it in the growth patterns of flowers and plants, while a zoologist sees it in the breeding of rabbits.10

In the 19th century, the French mathematician and scientist, Edouard Lucas, documented the Golden Proportion as it occurs in nature. The French architect Le Corbusier applied his concepts to modern architecture. Today, windows, furniture, automobiles, and smiles are designed using the concept of the Golden Proportion.

It is important to distinguish between the viewing width and the clinical width of a tooth. Viewing width is measured on a straight-on frontal photograph of the patient’s smile. Anatomical measurements taken in a patient’s mouth or on a model will not provide this relationship. To apply the concept of the Golden Proportion, a lateral incisor can be arbitrarily assigned a viewing width of 1, in which case the central incisor width should be 1.6, the cuspid 0.62, the first premolar 0.38, and the second premolar 0.23.4,18 This allows for a smile dominated by the central incisors, with the other teeth becoming progressively smaller.

A variation of the Golden Proportion was suggested by Snow.19 He proposed that the Golden Proportion could be used to develop symmetry, dominance, and proportion for aesthetically pleasing smiles. To simplify these proportions, the assigned values for the six anterior teeth were added (assigning 1.6 to the central, 1 to the lateral, and 0.62 to the cuspid). Then the assigned width of each tooth was divided by the total to determine the relative percentage. The resulting percentages were: central incisor 25%, lateral incisor 16%, and cuspid 9%. These percentages illustrate the dominance of the central incisors, which are 50% of the cuspid-to-cuspid width.

Following is a clinical case in which the concept of the Golden Proportion is applied.

The patient, a 42-year-old female, was unhappy with the appearance of her maxillary anterior teeth (Figure 1). She had four veneers that had been placed approximately 15 years ago. One had debonded and the other three had marginal leakage. She was unhappy with her smile because of the color and shape/size discrepancies of the maxillary anterior teeth. The patient did not display the mandibular teeth at full smile or during conversation, and therefore was not concerned about the appearance of these teeth.

The clinical examination revealed leaking porcelain veneers on the central incisors and the left lateral incisor. The veneer on the maxillary right cuspid had debonded. The tissue heights were slightly uneven, resulting in disproportional sizes of the teeth. The general periodontal health, however, was good. The patient’s occlusion exhibited loss of anterior guidance, which created group function. The patient did not report any tooth pain, and there was no history of TMJ symptoms.

The patient sought a smile of uniform symmetry, appropriate tooth shape, and lighter color. Tissue recontouring was discussed to allow for development of proper proportions of the new restorations. To evaluate the position of the incisal edge of the teeth, a direct mock-up was prepared. Although this can be accomplished with a wax-up, a direct mock-up not only allows the patient to preview and approve the length of the veneers, but serves as a preparation guide for the clinician.

Determining the location of the incisal edge of the central incisors is one of the most important factors for a successful reconstruction. The three determinants to be considered are occlusion, phonetics, and aesthetics. The occlusion should be characterized by anterior guidance, cuspid disclusion, lack of slide between centric relation and centric occlusion, absence of balancing or working side interferences, and equal and simultaneous force on each tooth when the teeth are in contact, with no deflection when additional force is exerted. Phonetics is also used as a guide to determine the position of the incisal edge. During the production of “F” or “V” sounds, the maxillary anterior teeth should lightly touch the vermilion border of the lower lip. Finally, both the clinician and the patient should evaluate the aesthetics of the proposed incisal edge position.

After determining the incisal edge position, the length and tissue heights of the central incisors are established. From this point a trace drawing can be used to apply design concepts. It is important to remember that the Golden Proportion is applied to the viewing width of teeth, using a frontal photograph. Using tracing paper, the patient’s teeth are outlined (Figure 2). The new incisal edge position and the gingival position are placed on the working outline (Figure 3). To give the central incisors a distinct rectangular shape, the width-to-height ratio should be approximately 75%. The length of the central incisors is measured on the photograph and multiplied by 0.75 to give the correct photographic width for these teeth (Figures 4 and 5). After marking the width measurement, the proposed shape of the new central incisors can be drawn (Figure 6). At this time, the width of the other anterior teeth can be established using the Golden Proportion.

This tracing helps to define the treatment plan. The tracing shows where tissue recontouring is required and helps in preparation design. The tracing demonstrates whether the widths of the teeth must be altered in order to design a proportional and symmetrical smile. To do this may require aggressive preparation of the teeth to open the contact areas, so the laboratory technician can establish the new proportions.

Prior to prescribing the final veneers, the provisional restorations are fabricated to the guidelines set forth in the smile design process. This gives the practitioner and patient an opportunity to evaluate the proposed aesthetics and occlusion. If necessary, changes can be made in the provisional restorations and relayed to the laboratory technician.

After patient approval, the final pressed ceramic restorations were placed using a resin cement. The patient’s occlusion and aesthetics were re-evaluated 1 week after cementation. The patient reported no sensitivity or complications. Occlusion and gingival health were excellent. The patient was given a mandibular bleaching tray to achieve a shade match between the mandibular and maxillary teeth. The completed case is shown in Figure 10.

In fact, several studies have indicated that wide variation exists for patients and dentists regarding ideal anterior tooth proportions.20-22 In a study by Rosenstiel et al,21 549 dentists evaluated computer images of the same six maxillary anterior teeth. Dentists preferred 80% proportions when viewing short or very short teeth, and the Golden Proportion (62%) for very tall teeth. There was no identifiable preference for teeth of normal length or tall teeth, and choices could not be predicted based on gender, specialist training, experience, or patient volume. The results of a similar study by Kokich et al22 demonstrated that orthodontists, general dentists, and lay people detect specific aesthetic discrepancies at different levels of change. In the case of the Golden Proportion, lay people did not discern a lateral incisor narrowing until the deviation reached 4 mm.

The patient who presents for cosmetic rehabilitation will probably not be comfortable with some of the wide deviations identified in the previous studies. Nevertheless, these studies demonstrate that no single rule or formula can be used to generalize across a population.

The design elements presented here do not represent a complete discussion of the available principles and techniques of smile design. In addition, patients and dentists will vary in their preferences. The principles described here offer one set of guidelines for aesthetic dentistry. In the case of the Golden Proportion, the exact proportions are not as important as are the concepts of symmetry and the use of a logical approach to aesthetic restoration of the maxillary anterior teeth.F

The authors would like to thank Frontier Dental Laboratory for fabricating the restorations presented in the article.

1. Moskowitz ME, Nayyar A. Determinants of dental esthetics: a rational for smile analysis and treatment. Compend Contin Educ Dent. 1995;16:1164-1166.

Dr. Javaheri is an assistant professor in the Advanced Education in General Dentistry residency program at University of the Pacific (UOP). He is the course director for the UOP continuing education program “Setting New Standards in Cosmetic Dentistry.” Dr. Javaheri has published numerous articles in various publications. He maintains an aesthetic/restorative practice in Alamo, Calif. Dr. Javaheri can be reached by e-mail at sjavaher@uop.edu. 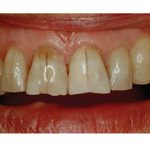