Control of the root surface environment has been an essential component of periodontal therapy for at least 1,000 years, when a Middle Eastern healer named El Zahwari (Albucassis) wrote in his treatise that “ye shall remove the encrustations on the teeth lest they be lost.”1 We have come a long way since then, but the basic requirements for periodontal health have not changed. Mechanical and chemical control of the root surface in order to achieve an environment compatible with the health of the supporting tissues remains the essence of periodontal management.2,3 However, with our current level of knowledge and understanding, we now have to consider the “big picture.”

SYSTEMIC MULTISYSTEM INVOLVEMENT
With its entire attendant ramifications related to its onset and ongoing inflammatory response, periodontal disease is associated with many issues of considerable concern. In addition to soft-tissue deformities, attachment loss and destruction of the osseous supporting structures of the teeth has historically been of concern (Figure 1).

What has begun to emerge in the last decade with increasingly strong supporting evidence is the complex interplay of metabolic events ushering in the ominous specter of systemic multisystem involvement.
It is essential for the clinician to put the multiple factors at play in some sort of perspective, so as to better understand the nature of the disease, and develop treatment algorithms that are both effective and understandable to the patient.
We know, first of all, periodontal diseases are gram negative anaerobic infections,4-6 mediated, in many cases, by the patient’s genetic predisposition to the disease.7 The causative organisms in the plaque or biofilm instigate the unfolding of a series of immune system responses that ultimately, result in clinical and histological inflammatory changes and disease activity (ongoing apical migration of the junctional epithelium or “attachment loss”).8,9 The initial thrust of periodontal therapy is suppression of the inflammatory response by eliminating or reducing the pathogenic bacterial load on the root surface, and in the sulcus with thorough instrumentation, often supplemented by topical or local administration of bactericidal agents such as chlorhexidine.10

BACTERIAL CONTROL
The rationale for bacterial control is supported by very solid evidence in the literature that has gradually allowed us to better understand the mechanisms involved in the pathogenesis of periodontal diseases. Anti-infective therapy can be divided into 3 components: biofilm control, adjunctive antimicrobial therapy, and, in many cases, surgical and restorative procedures to redefine soft and hard tissues for more efficient maintenance.

Every therapeutic regimen should begin with identification of the initiating or causative factors, and the patient’s sensitivity to them, with a clear therapeutic endpoint in mind. There is a plethora of data in the literature11-16 supporting the indisputable value of mechanical control of the root surface environment, as a starting point for inflammatory suppression. Scaling and root-planing has always, and continues to be, the cornerstone of periodontal disease management, and it takes on even greater importance in light of our current emphasis on root surface biofilm control17-20 as we add to our understanding of the complex inter-relationships between the pathogens and the host immune mechanism.

QUANTITATIVE DNA ANALYSIS
Knowing that the periodontal diseases are infections, it is appropriate to consider the medical model, whereby specific knowledge of the causative organisms can be used to plan a more guided approach to therapy. With the advent of quantitative DNA analysis of the pocket flora using polymerase chain reaction technology, we now have a simple way to determine not only the pathogens present in the pockets but their levels above threshold, and the ratios of organisms to each other. Using this information we can select the antibiotics or combination of antibiotics most suitable for the specific situation, based on well-documented published studies.21-26 A major step forward for the clinical implementation of this concept is the recent introduction of a salivary-DNA test for periodontal pathogens. This noninvasive test uses an oral rinse which is sent to the laboratory for analysis. The results (Figure 2) include a detailed analysis of the pathogens present in bar graph format, divided into the high-, medium-, and low-risk groups. Based on the patients medical history and their periodontal charting the reports include treatment considerations for more directed adjunctive therapy. Post-treatment testing approximately 6 weeks after completion of therapy shows the microbiological results (Figure 3).

USE OF SALIVA FOR DIAGNOSIS

The use of oral fluids, especially saliva for diagnosis, is an emerging tool, made possible by the increasingly sophisticated, sensitive, and accurate use of DNA analysis using polymerase chain reaction (PCR) technology.27,28 Analysis of oral fluid or saliva is currently used for the diagnosis of infectious and malignant diseases, hereditary disorders, autoimmune and endocrine disorders as well. It contains plasma electrolytes and many other metabolites, enzymes, and both bacterial and human DNA.

The use of salivary diagnostics for detection of periodontal pathogens is well supported in the literature.29-31 The bacterial DNA found in saliva and quantified with DNA-PCR analysis has been shown to equate, very closely, with the levels of pathogens found by direct samples from the periodontal pockets.32-35 The 2 reports in Figures 4 and 5 clearly show the virtually identical bacterial makeup between crevicular samples and saliva.
There is another, important, benefit to be derived from salivary testing. This relates to the genetic predisposition to periodontal disease. This predisposition is manifested clinically as an exaggerated response to inflammatory stimuli, such as those presented by periodontal pathogens, by inordinate amounts of inflammatory cytokines. The test is used to detect the simultaneous occurrence of allele 2 at the IL-1A+4845 and IL-1b+3954 loci. When both of these polymorphisms are present, patients are considered as being genotype positive and thus predisposed to periodontitis by virtue of the hyper-response to microbial mucopolysaccharides.36-38 The genetically predisposed patients (PST positive) are subject to greater periodontal destruction with less of a stimulus than nonsusceptible patients, and they comprise 30% to 35% of the population. When there are contributing factors that affect the immune system such as smoking and diabetes, for example, the destruction is even more significant.

LONG-STANDING THERAPEUTIC GOAL?
The importance of the microbial activation of the destructive inflammatory response is borne out by the known association of combinations of pathogens associated with measures of periodontal inflammation, as shown in Figures 2 to 5. This highlights the so-called high- (red complex), medium- (orange complex) and low-risk groups39 (Figure 5). These associations are well documented40 and relate, as well, to many systemic diseases, most notably coronary heart disease.41 The link between all of these oral and systemic manifestations is inflammation.
This brings us back to the observations made so many centuries ago. Control the root surface and pocket environment and the tissues heal. This has always been, and continues to be our therapeutic goal in managing periodontal disease, and, apparently, reducing the risk of systemic sequellae. The inception of accurate, reproducible, salivary diagnostics for the clinician puts us much closer to the goal of predicting therapeutic outcomes, and disease activity.42

Disclosure: Dr. Bader is on the Scientific Advisory Board of OralDNA Labs, Inc (A Quest Diagnostics Company). 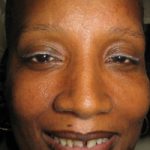 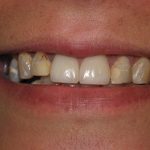