Obesity Could Result in Higher Risk of Tooth Loss

Overweight people have a higher probability of losing their teeth.

But the possible tooth loss has nothing to do with carrying a few extra pounds around. It’s usually their poor diet that adds the pounds, which also happens to be the same problem for their teeth.

A research team from Japan analyzed the eating habits and overall oral health of 800 recent college graduates and determined that the people that needed to lose weight had more of a chance of developing gum disease and losing their teeth when compared to slimmer people.

The combination of eating fatty, greasy foods and a low rate of fruit/vegetable consumption led to poor oral health. It also led to obesity. If the person was overweight but consumed a reasonable amount of vegetables, gum disease was less likely to be part of the person’s future.

Another problem for people in this age range is that they’re more susceptible to a poor diet. With the lack of home-cooked meals and the greater intake of alcohol than other age groups, a healthy diet is just not realistic for many college students.

That’s why it’s important for young people to be educated about the importance of oral health and the fact that poor oral health can easily lead to poor overall health. 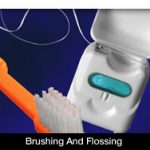 Next post Brushing and Flossing May Have Added Benefits
0 Shares