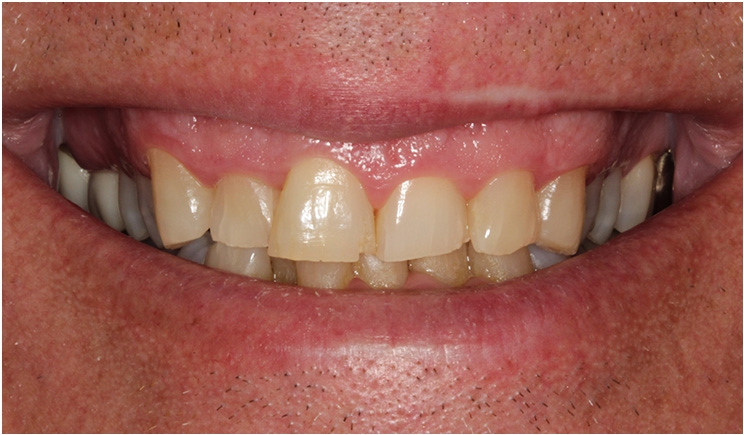 Some cases initially may seem overwhelming. But when the patient’s dental needs are evaluated and envisioned as separate entities, such restorations become much more straightforward.

A patient recently presented to our office with a chief complaint of being unhappy with his smile (Figure 1). He was looking for options for straighter and whiter teeth.

The examination revealed localized gingival inflammation, a need for a periodontal maintenance visit, and a history of scaling and root planing. Occlusally, severe wear was present throughout his dentition, and the anterior teeth were short and uneven in length (Figure 2).

Multiple old and failing restorations were present in the posterior teeth. A deep overbite was present, as was severe tooth crowding (Figures 3-5).

Aesthetically, additional findings included a high lip line exposing excessive gingival display along with asymmetrical soft-tissue levels throughout. Multiple old fillings with recurrent caries were present. There was a loss of vertical dimension, as seen with excess freeway space. The teeth were dark, and negative space was present in the posterior. Along with the severe tooth crowding, an uneven occlusal plane and a canted midline were present as well.

The patient also was advised that after treatment, lifetime orthodontic retention would be required as well as use of an occlusal guard during sleeping hours to protect his teeth from his heavy severe bruxism habit.

The patient underwent Align Technology Invisalign clear aligner treatment for one year. Toward the end of treatment, a previously treated root canal on tooth No. 3 fractured and required extraction. The tooth was extracted using a minimally invasive technique.

Great care was taken to preserve the buccal boney plate, and a corticocancellous allograft was placed to help preserve the ridge, allowing for a predictable implant site in the future. The Invisalign treatment continued for another four months, for a total of 12 months of clear aligner treatment.

At this point it was determined that aesthetic crown lengthening with osseous surgery would improve the overall aesthetic outcome of the case. The surgical phase was planned. Under IV sedation, a dental implant was placed in the healed extraction site of tooth No. 3.

Simultaneously, the aesthetic crown lengthening was performed. Bone was carefully removed from the facials of teeth Nos. 4-13 only. Care was taken to place the facial bony crest at a level 3 mm apical to the predetermined future free gingival margins of the teeth.

Six weeks after osseous surgery was performed (Figure 6), records were taken for diagnostic waxups of the upper and lower arches. The goal was to restore the teeth both aesthetically and functionally while slightly opening the vertical dimension.

This minor opening of the vertical dimension created a more ideal freeway space while also creating room for our restorative materials. The diagnostic waxups were used to make stents for tooth reduction guides and provisional restoration fabrication.

Approximately 10 weeks after the osseous surgery, under IV sedation, full-mouth rehabilitation was performed. Tooth preparations were aimed at being conservative in nature while achieving our goals for caries removal and aesthetic and functional rehabilitation. Where possible, onlay veneers (partial crowns) and veneers were placed as opposed to full crowns.

Conserving tooth structure is critical for the health of our patients. We chose Ivoclar Vivadent’s IPS e.max lithium disilicate for the restorations for its strength, aesthetics, and ability to be used as a “bondable” veneer, partial crown, or full crown.

The definitive restorations would be layered porcelain for believable aesthetics. The layered veneering porcelain was placed only on the facials of the teeth to decrease risk of damage due to the patient’s bruxism habit.

The patient chose a bleach shade (BL1). While this is quite light, the technician at Burbank Dental Lab did a great job in making the restoration highly aesthetic. The patient left the office in provisional crowns, onlay veneers, and veneers.

A few days after the preparation visit, the patient returned to the office to evaluate the occlusion and the aesthetics. Modifications to the occlusion and aesthetics were accomplished at this visit. Photos, alginate impressions, or digital scans are taken at this time for lab communication.

Over the next three weeks, the occlusion and aesthetics were further evaluated. During this time, the implant site for tooth No. 3 was left untouched and allowed to heal. Three weeks after the preparation visit, the definitive restorations were placed under IV sedation.

As these were “bonded” restorations, they were adhered to the teeth with Dentsply Sirona’s Prime&Bond elect and Pentron’s Mojo resin cement, using the total etch technique.

Six months after implant placement, the implant was surgically uncovered. Care was taken to avoid trauma to the papilla in the area of the adjacent teeth. Three weeks later, a screw-retained crown was fabricated using Cerec technology, and the final crown was delivered a few days later.

The final result was a very pleased patient (Figures 7 and 8).

Dr. Goldin is a Fellow of the American Academy of Cosmetic Dentistry (AACD) and a Diplomate of the International Congress of Oral Implantology (ICOI). He and his wife, Dr. Marcy Goldin, founded the Cosmetic Dentistry Institute in Troy, Michigan. Dr. Goldin is a Heartland Dental supported dentist. He practices full time and teaches other dentists about cosmetic and dental implant procedures.

Beauty: Much More Than the Smile! 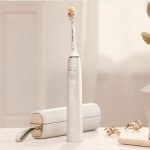 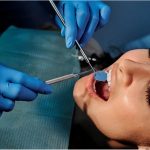 Next post Dentistry’s Slow Recovery Continued in May
0 Shares