When a patient presents with a partially edentulous arch, fixed restoration of the arch supported by dental implants and natural teeth requires proper planning and provisionalization. First, information must be obtained to help plan the case for function and aesthetics. Study models must be articulated so that the present occlusal relationship can be analyzed. Diagnostic wax-ups and intraoral waxups or diagnostic appliances must be utilized to evaluate aesthetics and phonetics.1 A detailed periodontal evaluation should be performed to determine which teeth can be saved for fixed prosthetic support. Radiographs including periapicals, panographs, and CT scans must be taken to evaluate the osseous support for dental implants. Interactive CT scans with radiographic guides offer detailed information with regard to implant placement related to tooth position and aesthetics.2

Patient feedback about the provisional is also an important step in helping guide the final prosthesis toward an ideal aesthetic and functional outcome.

This article will present 2 case reports that demonstrate the principles of treatment planning, provisionalization, and treatment sequences to restore a fixed full-arch prosthesis supported by dental implants and natural teeth.

A 57-year-old female presented with the chief complaint of inability to wear a removable partial denture. She was missing teeth Nos. 1, 16, 5 to 13, 20, and 29 to 32. An examination revealed moderate to advanced bone loss on her remaining maxillary and mandibular teeth, with no mobility noted (Figures 1 and 2). The patient’s health history was unremarkable.

The first step in determining a treatment plan was to place wax in the position of teeth Nos. 5 to 13 to observe upper lip support (Figure 3). Next, a laboratory-processed roundhouse provisional was created, supported by 2 provisional implants (Figures 4 and 5). It was then necessary to determine if bone grafting would be needed to support dental implants. A radiographic guide stent (Implant Logic Systems) was made to fit over the prepared teeth and fill the edentulous space of teeth Nos. 5 to 13 (Figure 6). This radiographic stent would be placed for the CT scan to allow planning of the dental implants in relation to the final desired tooth position. The patient was then sent for a CT scan, and the information was transferred to Sim Plant (Materiallese), an interactive CT scan program (Figures 7 and 8). The Sim Plant information revealed that some grafting would be performed simultaneous with implant placement. Dental implants were planned in the Sim Plant program in the right and left cuspid and lateral incisor positions. The transitional im-plants (Intra-Lock System) can be seen on the CT scan. These transitional implants would be removed at a later date, prior to final prosthesis delivery. A surgical guide stent with 2-mm guide pins was created by Implant Logic Systems, based on the data planned in Sim Plant (Figure 9). At surgery, 4 BioHorizons (BioHorizons Inc) dental im-plants were placed in position Nos. 6, 7, 10, 11 (Figure 10).

The panograph also reveals the wire-reinforced lab-processed provisionals. During the 5-month period while the implants osteointegrated, periodontal therapy was performed on the remainder of the mouth. After 5 months, the provisional implants were removed, and permanent fixed prostheses were created for the maxillary and mandibular arches (Figures 11 and 12). The implants were splinted separate from the natural teeth with a distal cantilever in the No. 12 position. A mesial cantilever from tooth No.13 was attached to tooth No.14. As planned, pink porcelain was placed at the gingival level, allow-ing only minimal exposure with the patient’s low lip line.

The end result was fixed prosthetics supported by dental implants and natural dentition. The patient was satisfied by having her removable partial denture replaced, with improved aesthetics, function, and phonetics.

A 48-year-old female in good health presented with a failing fixed prosthesis from teeth Nos. 6 to 11 (Figure 13). Teeth Nos. 6 and 11 were broken off at the gum line and the bridge was removable by hand. The panograph revealed multiple endodontically treated teeth and a severe upward curve to the preexisting anterior bridge (Figure 14). The missing posterior teeth and severe bite collapse likely caused the failure of the present anterior bridge (Figure 15). The remaining teeth were all periodontally stable and would be used to support fixed provisional prostheses.

The treatment plan consisted of establishing a correct vertical dimension with a fixed implant and natural tooth-supported prostheses. Teeth Nos. 6 and 11 were deemed hopeless and would be removed. The first step was to create a laboratory-processed provisional that would fulfill the goals with respect to vertical occlusal height and aesthetics (Figure 16). Two provisional implants (Intra-Lock System) were placed in the positions of teeth Nos. 6 and 11 to support the provisional prosthesis. Once the fixed provisional was delivered, a surgical stent was created based on the provisional to guide implant placement into the correlating tooth position (Figure 17). BioHorizons (BioHorizons) dental implants were planned in tooth positions 7 to 10 and 13 on the maxilla and 28 to 30 on the mandible.

The maxillary implants were placed as a 2-stage protocol and left covered by the gingival tissue. The postsurgical panograph shows the 2 provisional implants and the 5 maxillary implants (Figure 18). The mandibular implants were placed at a later date and also left as a 2-stage procedure. After a healing period of 4 months, all implants were uncovered and the tissue was formed with healing caps (Figure 19). Traditional crown and bridge impressions were made, and the metal framework was created on the models.

The final prosthesis was delivered a few weeks later (Figure 20). Note how the vertical dimension has been reestablished and full arch stability has been achieved. The provisional implants were removed at the time of permanent crown delivery. The patient has achieved a stable vertical dimension and improved aesthetics supported by both dental implants and natural teeth.

The 2 cases presented show the treatment sequences necessary to restore a full arch with fixed prostheses supported by dental implants and natural teeth. The process of diagnostic wax-ups and treatment planning are key steps in determining the final result. Management of provisional replacement utilizing provisional implants is also a key step in transitioning a case. Utilizing these principles of treatment planning and provisionalization, restoration of an arch with dental implants and natural teeth can be rewarding for both the patient and the treating dentist. 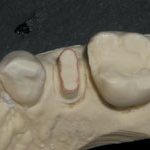