Veterinarians at the Highland Wildlife Park in Scotland recently did something they don’t do often.

They needed to perform surgery on a polar bear because the bear had a swollen jaw from antibiotics that did not cure an infection.

With the polar bear’s size, 10 people were needed to lift the bear onto the operating table. A team of four veterinarians was also needed to properly anesthetize the bear.

During the surgery, the veterinarians removed the infected tooth that caused the swelling. The procedure took four hours.

After the bear’s tooth was x-rayed, the initial thought was that a root canal could be done. But after further review, the decision was made to remove the tooth. The infection prevented the tooth from developing the way it was supposed to, and that’s why the only option was to remove the tooth.

The bear came through the surgery fine and was eating later that day.

After the surgery, the veterinarians concluded the infection stemmed from the bear breaking the tip of a tooth. They do not know when that happened or how it could have happened.

A dental specialist was part of the team of veterinarians that conducted the surgery.

The polar bear came to this particular zoo in November after arriving from Holland. 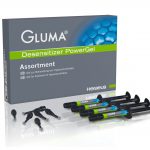 Previous post Heraeus Ushers in Next Generation of Desensitizers
Next post Discus Dental Invites You To The Sl3 Launch, Ball & Raffle
0 Shares