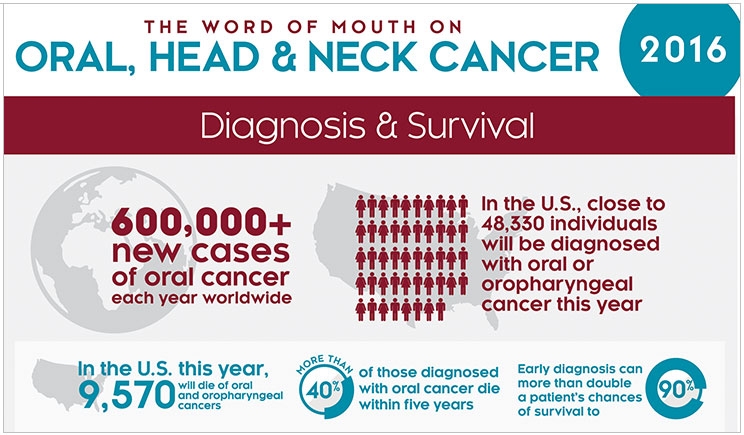 While many of us may have heard the horrific statistics associated with oral cancer, the personal stories behind those figures often go overlooked.

More than 600,000 cases of oral and oropharyngeal cancer are diagnosed each year worldwide, according to the World Health Organization. In the United States, more than 48,000 individuals will be diagnosed with this terrible, debilitating, and disfiguring disease this year with 9,570 deaths—roughly one person per hour, every day, 365 days a year.

Often thought of as a disease that primarily strikes older people or heavy smokers, it is shocking for many to learn that nonsmoking young adults are the fastest growing segment of oral cancer patients. This is largely due to the rise in HPV-16 diagnoses among this group.

Adding to these troubling numbers is that the death rate traditionally associated with oral cancer is very high due to late-stage diagnosis and intervention. Currently, most patients are diagnosed through a visual exam or are symptomatic, and at that point, the disease is likely at a late stage.

In contrast, early diagnosis of oral cancer can result in a cure rate of up to 90%. An easy-to-use, oral cancer-specific, and cost-effective test to help diagnose cancer sooner, even before visual or physical symptoms develop, could help overcome this challenge that we have faced for decades.

In such instances, many people overlook the terrible toll the disease takes on patients after treatment. If they are fortunate to beat the odds and survive, often they are forced to come to terms with realizing a new reality and a new normal, living with significant impairments in their quality of life.

As a result, an oral cancer patient’s heroic fight continues long after treatment. Having watched both of my parents battle oral cancer, I know firsthand the very real and devastating personal impact that a late-stage oral cancer diagnosis can have on individuals and their loved ones.

The experience of watching both of my parents struggle with oral cancer has fueled my personal mission to raise awareness of the disease and to help find a way to diagnose oral cancer at an earlier stage when it is more treatable.

My father, a 15-year Stage II survivor, ultimately succumbed to the disease in 2015 with some of the long-term effects of intervention. My mother, who does not fit a typical risk profile for oral cancer, is a 5-year+ Stage IV survivor.

Like so many people diagnosed with oral cancer, hers was not discovered and appropriately addressed until it had progressed to a very late stage. Ultimately, she endured aggressive surgery, chemotherapy, radiation, and finally reconstruction and rehabilitation to treat the cancer.

While she is now cancer free, she lives every day having to learn a new way of life and a new way to speak, to eat, and to interact socially—things most people take for granted.

Imagine not being able to speak or communicate clearly, whether that means clarity of speech or simply the ability to use your tongue or voice at all. Imagine having to be on a liquid or soft food diet for the rest of your life, enjoying what remnants of taste exist and hoping with each swallow that you don’t choke. If you do choke, you pray you have enough muscle control and mucous to cough up whatever gets caught.

And imagine the courage you would have to muster each and every day to go out in public just for life’s basic necessities with the unwanted attention to your disfigurement and impairment from aggressive intervention.

The Need for Awareness

This is the battle being fought by so many heroic individuals every day, and this is a battle I firmly believe can be won with early awareness, early detection, and early intervention.

Early awareness can help earlier intervention through treatment, but it can also include early interventions such as healthy habits and lifestyle choices that can minimize or reduce your risk of cancer. Fighting through these battles, many people share a common vision of a world where someday cancer will not be able to stand a fighting chance.

But as hundreds of thousands continue to be diagnosed with late-stage oral cancer every year, the current methods of screening may not be enough. We need to work together to impact those numbers by educating everyone about the risks of oral cancer and providing clinicians with simple, accurate, and cost-effective tests that can easily be adopted as part of the standard of care to help detect oral cancer before it is too late.

We also need to continue to raise awareness of the risk factors for oral cancer and the importance of early detection and healthy behaviors to minimize our risk of developing the disease. National Oral, Head and Neck Cancer Awareness Month is a great time to begin this dialog. Let us all join together to keep fighting the good fight. 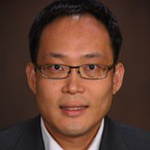 Inspired by both his parents’ battle to overcome their affliction with oral cancer, Matthew H. J. Kim founded Vigilant Biosciences, Inc. in 2011 and serves as the company’s chairman and chief executive officer. As CEO, he has spearheaded the development and commercialization of the company’s first products, the OncAlert LAB Assay and the OncAlert Rapid Point-of-Care Test. Previously, he was involved with the founding of several startups, including the first spinoff company from the Centers for Disease Control and Prevention (CDC) and a strategic intellectual property asset management consulting group. He received his bachelor’s degree in biology from Washington University in St. Louis and his juris doctorate from Georgia State University, and he is licensed to practice law in Georgia and before the U.S. Patent and Trademark Office. 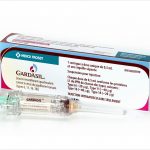 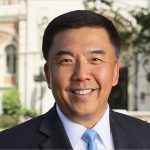