ST. PAUL, Minn., (February 26, 2014) – The Chicago Dental Society presented Biffle with the George H. Cushing award, which is given to an individual or group that has raised the public awareness of oral health issues. Past recipients have included Surgeon General Dr. David Satcher, the Shriver Family and many more. 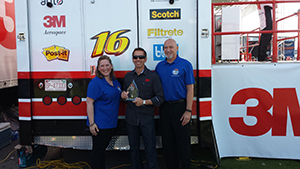 “It’s an honor to work with a program like Give Kids A Smile on behalf of 3M ESPE and be able to help share the dental health education message with so many kids,” said Greg Biffle, driver of the No. 16 3M Ford Fusion.  “I really appreciate being recognized for the George Cushing award, but the recognition really goes to the volunteers and dental health professionals who deliver this program around the country.”

George H. Cushing was a prominent Chicago dentist in the mid 1800s and served as CDS president five times. He was a strong advocate of dental health education.

“Today we have the honor of bestowing the award to Greg Biffle,” announced Dr. Phil Schefke, the 2014 Chair of the Communications Committee.  “Biffle, NASCAR  driver of the #16 3M ESPE Dental car, for the last three years has been working in conjunction with ADA on their Give Kids a Smile Day program. He has been helping deliver the message about the benefits of healthy habits like brushing, flossing, visiting the dentist and making smart food choices to children around the country at NASCAR events. This past September one of these events was at the University of Illinois Chicago. The dental clinic hosted kids from St. Malachy School for dental screenings.”

When the engines fire at Daytona, not only will it mark the start of the 2014 NASCAR Sprint Cup season, it will kick off the fourth year that NASCAR star Greg Biffle is encouraging kids to “Brush with the Biff.”

3M ESPE Dental has joined together with the American Dental Association’s Give Kids A Smile program, ADA Foundation, Henry Schein, Inc. (NASDAQ:HSIC), CareCredit℠, Church and Dwight, Oral Health America and NASCAR star Greg Biffle again to put good oral health on the fast track for young fans of NASCAR.  Across the country, Biffle, driver of the No. 16 3M Ford Fusion in the NASCAR Sprint Cup Series, is helping deliver the message to children about healthy habits like brushing for two minutes twice a day, flossing, visiting the dentist regularly and making smart food choices.

During the 2014 NASCAR season, 3M ESPE Dental will bring the “Brush with the Biff” program to 11 racetracks. At each race, race fans of all ages visit the 3M display in the midway for fun family activities, education about healthy dental habits, dental care kits that include Church and Dwight SpinBrushes and ToothTune toothbrushes, and a chance to meet Biffle on race day.

In five race markets, the Give Kids A Smile program will race into local schools for fun-filled high-speed oral health education events featuring members of the No. 16 3M Ford Fusion race team and the No. 16 3M race car.  Through a grant from the ADA Foundation made possible by funding from CareCredit, more than 7,500 students will have an opportunity to learn about Biffle and 3M Racing and get smart dental tips that will improve their dental health, confidence and ability to pay attention in school.

In addition to following Biffle on the track, race fans of all ages can put themselves in victory lane with him.   Just visit www.3MESPE.com/givekidsasmile to create a photo with Greg Biffle on pit road or with the race-winning trophy in Victory Lane.  For more smart dental tips, visit www.2min2x.org,  www.MouthHealthy.org
and www.Facebook.com/GiveKidsASmile.

The yearlong ADA Give Kids A Smile education program, now in its 12th year, includes a national public service announcement featuring Greg Biffle and ongoing outreach to parents and children through dental offices, community events and media. Throughout the year, more than 1,850 Give Kids A Smile events will be held around the country, providing dental services to approximately 350,000 underserved children.