The Reintroduction of an Effective Cavity Liner

﻿INTRODUCTION
Materials and techniques in dentistry are ever changing. The subject of cavity liners is not immune to this.1 This was confirmed by what our dental schools are teaching their students; after being surveyed, it was shown that there is no unanimity of opinion among them.2,3 Therefore, it is incumbent upon clinicians to constantly review their protocol for the use of liners in their office.4
Adding to this bewilderment is the fact that as a profession, we do not have a uniform understanding as to what a cavity liner actually is. For instance, Ferracane5 defines a liner as a material that is applied as a thin layer to seal the dentine floor and walls of the cavity from the influx of bacteria and irritants from restorative procedures. Compare this to Phillip’s Science of Dental Materials6 which defines a liner as a thin layer of “cement” used for the protection of the pulp; and to the textbook, Restorative Dental Materials,7 in which the authors define a cavity liner as a suspension of CaOH in an organic liquid. Upon evaporation of the solvent, the remaining film on the tooth is the liner. In an attempt to alleviate this confusion, this author suggests that we define a cavity liner as a thin layer of material (0.5 mm) that is placed on the surface of the tooth preparation; this layer, in part, protects the tooth from the restorative material, intraoral fluids, and ultimately from the outside environment. Additionally, cavity liners usually do not have sufficient thickness, hardness, or strength to be used alone in a deep cavity.8

Causes of Pulpal Sensitivity
In the distant past, it was thought that the material used to restore the tooth was harmful to that tooth.9 This would allow the patient to suffer from postoperative pain or sensitivity. Due to this fact, we would need to put a substance in the tooth under the restoration. This layer would then serve to act as a buffer or barrier. Such a substance would then reduce or even prevent any postoperative sensitivity.
Now, experience and research have shown this to not be true. In fact, it is now believed that bacteria (and their byproducts) are the cause of postoperative discomfort.
Bacteria found in the mouth enter the tooth at the margins of existing restorations. This process is known as microleakage,7 and it occurs via capillary action of the oral fluids. Microleakage has also been defined as the marginal permeability of bacterial, chemical, and molecular invasion at the interface between the teeth and restorative material.10 The restorative margins are affected by the difference in thermal expansion between the restorative material and the tooth, polymerization shrinkage, effects of finishing and polishing, orientation of enamel prisms, application methods, and cavity configuration.
Microleakage is not the only cause of postoperative sensitivity. A widely accepted theory is that postoperative sensitivity is caused by the movement of a fluid in the space or gap between the tooth and the restoration. This will result in a change in osmotic pressure.11 Brännström11 referred to this as the hydrodynamic theory. He11 goes on to explain that any opening that allows dentinal fluid to flow out of the tubule will also allow bacteria to flow in to the tooth and eventually come in contact with the pulp.
According to Camps et al,12 the pulpal reaction is mainly affected by bacteria within the tooth. It has also been shown that if the cavity preparation is completely sealed, the dentin becomes insensitive, resulting in no postoperative sensitivity.13
Clinicians should also remember that desiccation of the cavity preparation, thermal conductivity, and contact between dissimilar metals can also cause postoperative sensitivity. The placement of a liner on the dentin would eliminate this.14 A liner should generally flow and adapt well to the pulpal floor, allowing a better seal of the dentin.15

Cavity Liners
There are a number of different types of products that are available to the clinician for use as a liner. Based on their chemistry, they can be classified as: varnish, calcium hdroxide (CaOH), zinc oxide eugenol, zinc phosphate, zinc polycarboxylate, glass ionomer, and resin.
Dental manufacturers are constantly making new products, or “improved” versions of existing products. Additionally, these manufacturers are, in part, focusing on materials and delivery systems that would be easier to use for the clinician. However, for many of us, these changes come along too fast, with little long-term research trials to back the various claims being made.
The purpose of this article is to reintroduce to dentists a product that first became available in 1960 as a cavity liner and dentin sealer.
Based on the 2 survey studies23 referenced earlier, the use of CaOH in deep cavity preparations has increased since the early mid-1990s. Calcium hydroxide is available in both a paste-paste (2 component system) and a resin-based (one component) version. The resin-based product is called Hydroxyline (George Taub Products). It is available in both white and dentin colors and contains CaOH (relatively low concentration) along with titanium dioxide in a methyl methacrylate solution. After placement, the ketone solvent component evaporates off. This leaves behind an effective barrier that seals the dentinal tubules, decreasing dentinal permeability.
Hydroxyline may be used more safely and effectively than CaOH paste-paste systems to protect the pulp when acid etching.16 Additionally, these authors16 write that the paste-paste versions are more soluble in phosphoric acid than Hydroxyline. Therefore, Hydroxyline is better at sealing the dentinal tubules, decreasing dentin permeability, and increasing pulpal protection.17
In a study on pulpal responses in rhesus monkeys, it was shown that an effective liner (such as Hydroxyline) can reduce the amount of hydraulic force encountered when castings are cemented.18
In 1990, Pashley et al,19 when investigating dentin treatments and the reduction in dentin permeability, showed that there was no statistical difference between the protection produced by Scotchbond (3M ESPE) and Hydroxyline. The authors19 also stated that they were impressed with the ability of Hydroxyline to seal dentin using both SEM and permeability measurements. This ability to readily seal dentin was confirmed by Rizza and Shusterman (in an unpublished study done in 2001) when Hydroxyline was placed out to the cavosurface margin under amalgam restorations.
The manufacturers of Hydroxyline have made dispensing this material very easy for the clinician. The package includes the liquid and a thinner along with an eyedropper. To use it, the operator just needs to shake the bottle and then place the cap on a mixing pad. The “wet” inside surface of the cover will deposit a small drop of the liquid on to the mixing pad. The manufacturer recommends using a small ball burnisher, brush, or cotton pellet to apply the liquid directly to the cavity surface. (The author uses a small microbrush-type applicator.) The material will set in approximately 15 seconds after placement.

CASE REPORT
Diagnosis and Treatment Planning
A 71-year-old female patient presented with the distal-buccal cusp fractured off of her mandibular right second molar (tooth No. 31) (Figure 1). The tooth was asymptomatic, with periapical and bite-wing radiographs revealing nothing remarkable.
Due to her financial situation, she chose to have the tooth restored with an amalgam restoration rather than with a more ideal full-coverage option.

Clinical Protocol
Local anesthesia (Lidocaine HCL 2% and epinephrene 1:100,000 [Schein]) was administered and the remaining amalgam was removed (Figure 2). Since the distal-buccal margin was subgingival, the placement of a rubber dam was not possible. A matrix band served to aid in isolation prior to placement of the Hydroxyline with a microbrush applicator (Figures 3 and 4).
Figure 5 shows the completed amalgam (Tytin [Kerr]) restoration. A follow-up telephone call was made to the patient 2 weeks postoperatively and no postoperative symptoms/sensitivity were reported.

CLOSING COMMENTS
The product described and used in this case is an example of the many materials in dentistry that have a long and successful history. It is the author’s opinion that clinicians would benefit for considering the long-term evidence for any dental material when establishing their clinical protocols.

Dr. Weiner received his DMD from Tufts University in 1986. He is a Fellow of the AGD, the American College of Dentists, and the Pierre Fauchard Academy. He writes and lectures on liners, bases, and cements. He maintains a private practice in family and cosmetic dentistry in Millis, Mass. He can be reached at (508) 376-4949 or randy@weinerdmd.com.

Disclosure: The author received an honorarium from George Taub Products for writing this article. 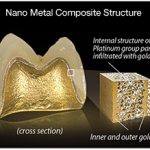