A retrospective study by Balshe, et al compared the survival rates of smooth- and rough-surface dental im­plants. The study retrospectively re­viewed patient charts for the time period from January 1, 1991, through Dec­ember 31, 1996, during which smooth-surface im­plants were used, and also reviewed the time period from January 1, 2001, through December 31, 2005, during which rough-surface im­plants were used. The study included all implants placed and restored in one institution during the above 2 time frames. Data that were collected included patient age and gender, implant diameter and length, and anatomic lo­cation of the implants. Fur­ther, implants from the first time period were followed through mid 1998 and im­plants from the second time period were followed through mid-2007. 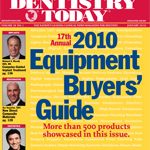