Prefabricated Composite Veneers: A Conservative Solution for the Aesthetic Zone

INTRODUCTION
When considering the restoration of anterior teeth, with an eye on minimizing tooth preparation, the use of prefabricated composite veneers offers a material alternative that can yield a highly aesthetic appearance.1 Other advantages of this method include single-appointment restoration, no lab fees, and restorations that can be easily maintained. A prefabricated, or direct, composite veneer that has a highly polished and anatomically correct facial surface provides an ideal alternative to the more expensive porcelain veneers that have also found increasing popularity.2

Composite resins have been used for directly veneering anterior teeth for many years. Both cold-cured (eg, Concise [3M ESPE] and Adaptic [Johnson & Johnson]) and ultraviolet light-cured (eg, Nuva-Fil) composites had been used for this purpose starting in the late 1970s.3 They were often thick restorations, and in addition, these restorations were difficult to polish because of the large filler particles. The plucking associated with the larger particle size also resulted in an eventual loss of polish/luster. The advent of smaller-particle fillers (nanohybrids, microfills, and nanofills) in the composite matrix has yielded highly polishable composites that will maintain their luster, making them an ideal choice for aesthetic restorations.4

CASE REPORT
Diagnosis and Treatment Planning
A 61-year-old male who was dissatisfied with the appearance of his teeth presented to our clinic. Previously, direct composite veneers had been placed on his maxillary incisors and right canine, resulting in a satisfactory solution at placement. However, throughout time, the veneers had chipped, discolored, and stained. He was not overly concerned with having a perfect “Hollywood look” but was definitely displeased with the aesthetics of his smile and motivated to take action to remedy his appearance (Figure 1).

The health history included radiation and chemotherapy for multiple myeloma that was in remission at the time of this visit. He had also undergone hip replacement surgery. He was being treated every 3 to 4 months with Aredia, a bisphosphonate drug, and he was also on Revlimid daily, a drug used to treat anemia associated with decreased bone marrow function.

The oral examination revealed multiple missing teeth that were replaced with a PFM bridge, and removable partial dentures made of a flexible acrylic. Several single PFM crowns were also present. The mandibular anterior teeth exhibited a lot of wear, enamel chipping, and stains. Abfraction lesions were present in both maxillary and mandibular anterior teeth. Areas of caries were also found in teeth Nos. 6 and 9. Some gingival inflammation was noted along with exposed root surfaces, but even though there was a history of periodontal disease, no evidence of any active infection was found.

Study models were prepared and a diagnostic wax-up was made to provide a guide for veneer placement. These models were also used to give an initial indication of what size of veneers would be needed.

The patient’s chief concern was the appearance of the 5 maxillary anterior teeth that were not crowned. Following the discussion of the options available to him, he elected to have these teeth veneered with prefabricated composite veneers with the hope of matching the veneers to the shade of the PFM crown on tooth No. 11. The Edelweiss Composite Veneer System (Ultradent Products) was chosen for this case. We were concerned about making sure that the cervical lesions were also properly restored and decided to use glass ionomers (GIs) to cover these areas. GIs have been advocated as a means of minimizing microleakage where the margins are placed in dentin or cementum, thus making it a better option than composite to restore the cervical regions.5 The patient also elected to have a new flexible acrylic-based removable partial denture made to restore his missing maxillary dentition.

Clinical Protocol
On the day of treatment, the patient reported to the clinic in good health and frame of mind in anticipation of the veneer procedure. Utilizing the Edelweiss shade guide, shade A2 was chosen as the closest match to the PFM crown on the maxillary left canine (Figure 2).

The patient’s teeth were cleaned using a prophy cup with a premixed paste containing pumice and chlorhexadine (Preppies Plus [Whip Mix]) (Figure 3). The decision was made to proceed without the use of a dental dam because of the lack of anchorage available to allow for stable placement.

By placing the transparent veneer-sizing guide over the teeth, the size S veneers were selected for this procedure (Figure 4).

Preparation of the teeth was a matter of removing most of the existing composite veneers and cleaning the surfaces with Consepsis Scrub ([Ultradent Products]). Only minimal preparation of any enamel was needed, and the surfaces were left roughened (Figure 5). Isolation was obtained by use of cotton rolls and Teflon (DuPont) tape (Figure 6). The tape was applied to prevent accidental bonding of any adjacent teeth to the veneered teeth.

Restoration of the 5 anterior teeth was done one at a time, allowing for placement and initial adjustments, and to permit each tooth to have as much isolation as possible during the process. The veneer was evaluated in place on its constituent tooth and adjusted (as needed) using an abrasive Jiffy cup (Ultradent Products) (Figure 7). The inner surface of the veneer was roughened with a diamond bur (Figure 8) and then cleaned with a chlorhexidine solution (Consepsis [Ultradent Products]) (Figure 9). Then, this surface was etched with Ultra-Etch (Ultradent Products) 35% phosphoric acid for 5 seconds, rinsed, and air-dried (Figure 10). The veneer was then coated with Peak Universal Bond (Ultradent Products), which was agitated for 10 seconds, gently thinned with air, and then light-cured for 20 seconds with Silverlight (GC America) (Figure 11). The tooth was then etched with the Ultra-Etch for 20 seconds (Figure 12), rinsed, and slightly dried, leaving the tooth surface slightly damp. Next, a universal adhesive (Peak Universal Bond) was applied to the facial surface (Figure 13), agitated for 10 seconds, gently thinned with air, and then light-cured for 20 seconds using Silverlight (Figure 14). A one-cm strip of shade A2 Amelogen Plus (Ultradent Products) composite was dispensed, rolled into a ball, and placed onto the inner surface of the veneer. The composite was then spread and adapted to the full inner surface (Figure 15). The veneer was positioned onto the tooth then gently pressed into place. Next, the initial excess composite was removed (Figure 16). The incisal edge was then point cured for 3 seconds to stabilize the veneer so that any remaining excess composite could be removed from the other margins. Following this step, the veneer was light cured from facial, lingual, and lateral aspects for 20-second intervals.

The pre-cementation and bonding processes described above were repeated for each of the teeth until all 5 veneers were in place. Shade A2 Fuji Glass Ionomer (GC America) was used to complete the gingival coverage on the left central incisor, the right canine, and both lateral incisors (Figure 17). All of the veneers were then adjusted, finished, and polished using fine diamond and carbide finishing burs as well as EP System (Brasseler USA) finishing discs, followed by Jiffy polishing cups and brushes (Figures 18 and 19).

When the patient saw all the veneers bonded in place, he was excited about his new appearance and expressed great pleasure with the results. However, upon further review, there will probably still be some minor tweaking of these veneers to better hide the discrepancy between the appearance of the composite and GI restorative materials (Figure 20).

CLOSING COMMENTS
While porcelain veneers have long been considered “the gold standard,”6 prefabricated composite resin veneers have a definite place in the lineup of choices when aesthetic considerations are an issue. These restorations can be placed in one appointment and involve a relatively short learning curve to be able to manipulate. The lack of involvement with the dental laboratory team makes this type of restoration economically feasible, thus making veneers more attractive to a larger number of patients. There is minimal need for tooth preparation and no need for impressions or model and die work.

Prefabricated composite veneers are an excellent alternative to porcelain veneers and give the operator an easier way to get acceptable facial morphology in a shorter time period.

Dr. Lewis is a 1978 graduate of the West Virginia University School of Dentistry (WVU SOD), with 3 years of service as a dental officer in the US Navy, 14 years of private practice, and 19 years of academia, which includes 6 years at WVU SOD and 13 years at the University of Tennessee College of Dentistry (UT COD). Recently retired from UT COD, he retains his commitment to excellence after years of clinical and classroom teaching and service as the director of the University Dental Faculty Practice. He can be reached at drmwlewis@gmail.com.

Dr. Braxton is a 2008 graduate of Meharry Medical College School of Dentistry in Nashville and has completed a general practice residency at the Bronx Lebanon Hospital Center in New York. She practice briefly in upstate New York and is currently an assistant professor in the department of restorative dentistry at the University of Tennessee Health Science Center College of Dentistry in Memphis. She is actively involved in the school’s mission of improving oral health through education, research, clinical care, and public service. She can be reached via email at abraxton@uthsc.edu.

Dr. Wasson is a 1979 graduate of the University of Tennessee Health Science Center (UTHSC) College of Dentistry. She has 35 years of clinical experience—9 years in a free-standing ambulatory healthcare facility and 26 years in academia. She earned a master’s degree in public administration at the University of Memphis and an MS in restorative dentistry from the University of Michigan Dental School, and she is a Master in the AGD. She is currently an associate professor in the department of restorative dentistry at the UTHSC College of Dentistry and has been involved in research and publication for several dental journals. As an educator, she has been involved in patient care and teaching and well as academic committee services, course direction, and community engagement efforts. She can be reached via email at wwasson@uthsc.edu. 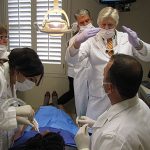