Previous post Influence of GI Base on Composite Restoration Survival 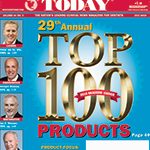