Periodontitis may be Preventable

There could be a new method to stop periodontitis.

By blocking a molecular receptor that is usually targeted by bacteria, scientists from the University of Pennsylvania have shown the ability to prevent periodontitis in a mouse model. They also demonstrated the ability to stop the progression of the disease once it has already begun developing.

The study appeared in the Journal of Immunology.

Previous research showed that Porphyromonas gingivalis, which is the bacterium that causes periodontitis, basically hijacks a receptor on white blood cells. The receptor, C5aR, is part of the complement system, which is also part of the immune system that aids in fighting infection.

There were several other studies that enabled these researchers to come to their conclusion. These studies confirmed the idea that the C5aR receptor could be successful in curbing all types of periodontitis, not just the form that includes P. gingivalis.

More tests will be conducted on mice and other animals to make sure the results would have the same impact on humans. 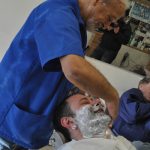