Many new implants can make chewing extremely painful in the ensuing weeks and months.

Now, there’s a way to limit that issue. A group of researchers tested a drug coating that enables the titanium screws of an implant to stick to the bone faster and in superior fashion.

The information was gathered by a team at Linkoping University in Sweden and was mentioned in the British Medical Journal.

Since the implants are screwed into the jawbone, the current accepted technology takes around four to six months before the bone is fully healed. It is only at this point when the patient can reap the benefits from their surgery.

This new coating, however, comprises a nanometer-thin protein that connects to the metal surface. A drug related to bisphosphonates, generally used to treat osteoporosis, attaches to the protein. Numerous studies have indicated that this process increases the strength and density of the bone.

This method was previously tested on animals but was now tested on people. There were 16 patients that received a normal implant and a surface-treated implant. The dental surgeon and patient were kept in the dark as to which one was which. The treated screw turned out better in 15 of 16 people.

The ability to reinforce the bone based on an implant with localized medication had never been done before, according to Per Aspenberg, the leader of the study. If this information gets put into action, the process will speed up immensely. 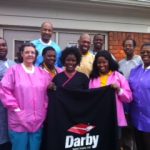