A lollipop may solve a tooth decay problem.

According to a new study, a sugarfree lollipop successfully battles tooth decay. The study indicates that these lollipops prevent tooth decay by limiting the amount of the bacteria that causes tooth decay.

The study analyzed information compiled from research among 66 preshool children ages 2 through 5 in Lansing, Mich. It was determined by Wenyuan Shi, a microbiologist and dentistry professor, that these lollipops decreased Streptoccocus mutans.

The children were given lollipops containing licorice root extract for 10-minute periods two times each day for a time frame of three weeks.

To check the level of S. mutans, the research team implemented a saliva test in every child’s mouth before and during the three-week study. They continued to monitor these saliva tests even after the children no longer received the lollipops.

The researchers concluded that there was a large amount of reduction in S. Mutans during the study, and the lower numbers continued for slightly more than three weeks until they started to increase again.

The study was published in the journal European Academy of Pediatric Dentistry. These lollipops could stop mothers from transferring the bacteria and tooth decay to their children.

The Food and Drug Administration approved the ingredients used in the lollipops.

Licorice root extract is thought to kill S. mutans, enabling the lollipops to be effective. This bacteria is one of roughly 700 present in the human mouth. S. mutans lives in plaque and releases acid that eventually leads to decay.

This information could lead to more widespread consumption of sugar-free licorice root lollipops or licorice root extract to battle tooth decay among children.

Shi joined with other scientists in China to look at the impact of traditional herbs but they found that licorice root extract was the best at killing the bacteria it needed to kill and leaving other bacteria unharmed. 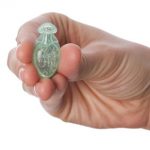 Next post What are Patients Buying From a Dentist?
0 Shares