Several fluoride-releasing bonding ma­terials are available for orthodontic bracket placement, with the objective of preventing white spot lesions during therapy. An in vitro study by Pseiner, et al published in the Eu­ropean Journal of Orthodontics evaluated the shear bond strength (SBS) and failure mode of a recently in­troduced fluoride-releasing adhesive, and compared it to established orthodontic adhesives. The study involved 60 bo­vine mandibular incisors which were randomly allocated to 3 groups (n = 20), as follows: stainless steel brackets were bonded with; Group 1—Trans­bond Plus Color Change Adhesive, Group 2—Trans­bond XT, and Group 3—Light Bond. A universal testing machine was used to determine the SBS. After debonding, the adhesive remnant index (ARI) was used to assess the adhesive remaining on the brackets. The study found that there were no differences be­tween the bonding systems for mean SBS (P = .27). ARI scores showed more residual adhesive on the teeth bonded with the Transbond systems (P < .01). The study concluded that since the fluoride-releasing bonding system exhibited sufficient mean bond strength in vitro (19.9 MPa), it may be used as an additional prophylactic measure in orthodontic therapy. The authors note, however, that the clinical effectiveness of the fluoride release of the material may be questionable because the amount of fluoride re­quired from a bonding material for caries prevention remains unknown.
Source: European Journal of Ortho­don­tics, published online on Jan­uary 15, 2010, and is available at the journal Web site ejo.oxfordjour­nals.org) 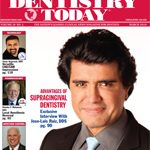