Edgar R. R. Parker, AKA Painless Parker, was born in 1872, in New Brunswick, Canada. Parker studied at Acadia University (strong Baptist religious affiliation) in Wolfville, Nova Scotia, and later at the Baptist Seminary in St. Martins, New Brunswick. He was expelled from both. If nothing else, Parker achieved the Bible-thumping pulpit oratory of a paster in the late 1800s.

Coincidentally, over one-hundred years later, NYU College of Dentistry would retain Dr. Roger Levin in collaboration with former Dean, Dr. Michael C. Alfano, to implement the Levin Group Method, which placed a focus on students’ generation of production income for the dental school. Some of that financial focus led to unfortunate outcomes for students and the program’s reputation. NYU College of Dentistry has since amended that curriculum effort. 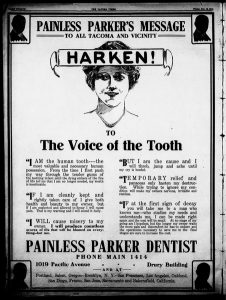 Undeterred, Parker went onto the Philadelphia Dental College (today, Temple University School of Dentistry), which he graduated from in 1892. Temple University School of Dentistry’s Historical Museum has a display dedicated to Parker, with his necklace of 357 teeth, and a large bucket filled to the brim with teeth that he had personally extracted. Allegedly the teeth necklace was the result of a single day of exodontia on a vaudeville stage, and often worn during his exhibitions to the public.

The bucket of teeth sat by his feet as he educated his tent show audiences, on the value and benefits of dental hygiene.

Parker discovered economic success once he partnered with former P.T. Barnum manager, William Beebe. The pair created a dental traveling circus. Parker was attired in top hat, a wide lapeled coat with tails, and his famous necklace of human teeth. He also sported a Vandyke mustache and goatee.

A sham patient would be planted in the audience. Parker would pretend to painlessly extract a molar for the crowd, which was previously extracted and already placed in the mouth of the “patient.” This was only one shill Parker played to demonstrate his dental extraction technique was indeed painless.

This methodology of deception is not too far removed from modern fake online dental reviews. It also mimics TV and radio ads of comfortable dentistry rendered through bogus testimonials and phony reenactments.

Parker’s dental theater included circus animals, contortionists, lovely dancing ladies, and most importantly, a brass band. If a true dental extraction patient were to cry out in pain, Parker would quickly tap his foot on the floor. That signaled the band to play louder and drown out the patient’s moans and shrieks.

Today, we see comparable methods with positive distraction techniques, such as audio headphones or a television screen mounted on the ceiling for patient viewing. Dental hypnosis is another beneficial procedure.

Negative modern similarities include children’s Medicaid mill clinics, which drown out sounds of screaming kids strapped into papoose boards with inadequate local anesthesia. The clinical area radio’s volume will be cranked to the highest setting possible. Parents attuned to their child’s voice sitting in the distant reception room will hear nothing of concern.

The dental theatrical stage success peaked, and by 1900, Parker was operating five dental clinics in New York City and additionally, one each in Albany and Troy, New York. Each of his 15 hired associate dentists would work three chairs each. Overhead pulleys and clotheslines were installed in each clinic, in order to send billing statements to the office’s front desk.

This represented the early beginning of chain dental service organization (DSO) dentistry. Parker brought various efficiencies into his clinics to maximize production, which are copied in a variety of forms today. He pioneered high-volume, low-cost dentistry. He focused great effort on advertising, whether or not there existed much veracity in his advertising.

Parker also innovated local anesthetic prior to the invention of Novocain (precursor to lidocaine). He injected a diluted form of cocaine into tooth cavities (not soft tissue). If the cocaine solution entered pulpal tissue of a severely carious tooth, he might achieve anesthesia. If the medication inadvertently dripped onto gingival tissue, he again might achieve a degree of localized anesthesia. All too often, “Painless” Parker regularly depended upon the distraction cacophony of his brass band and a shot of hard liquor.

Into our modern era, pharmaceutical grade cocaine spray may be applied topically to provide profound anesthesia for nasotracheal intubation. Many oral maxillo-facial surgeons and anesthesiologists maintain a supply.

Parker was frequently detested by his colleagues as acting unprofessionally and demeaning to the dental profession. The American Dental Association (ADA) openly called Parker, “a menace to the dignity of the dental profession.” Although his employee dentists earned an upper tier salary, many were ashamed to work for him. Many had significant alcohol problems.

We see this example today with conventional or mainstream doctors calling out alleged dental hucksters and charlatans. Sometimes those decried are operating chain clinics or promoting methods and materials, which may not have thoroughly passed a structured peer-review process, or are already proven of minimal efficacy. Some allegedly place dollar production above patient welfare.

A few are truly at the forefront of dental science and patient education. They are perhaps misunderstood in their current time.

At age 35, in 1905, Parker elected to cash-out and enter early retirement. He sold off his New York clinics and headed to sunny Los Angeles with his family.

Retirement was short-lived and Parker established his “Parker Dental Circus” in 1908.

The show would travel to towns up-and-down the California coast. A morning parade would draw interest and a crowd. Later in the afternoon, circus acts were conducted. A highlight was Parker’s educational lectures on dental hygiene. The show’s finale was Parker drawing a crowd for dental extraction services. And the band played on.

When statutes were enforced to limit the number of clinics a single doctor could lawfully own, Parker franchised his name to other dentist owners. This eventually totaled 30 dental clinics, 79 dentists, in eight states, under the “Painless Parker’s Dental Parlors” company brand.

A similar structure of franchise dentistry is fully evident today. It is generally unclear if these “owner” dentists were then nominal owners, beneficial owners, something in between, or franchise owners. The same opaque ownership structure exists today in the world of corporate dentistry.

Complaints also came before the Dental Board of California that false advertising was generated by using the marketing brand “Painless Parker.” In 1915, Parker legally changed his name to Painless Parker to circumvent statutes prohibiting fictitious ownership titles.

Parker’s efforts made him a very wealthy man. In 1915, Parker purchased the 218 acre Valle Vista Ranch (today called Parker Ranch neighborhood) in the Santa Cruz Mountains as a family escape. He owned a luxury San Francisco town home, a yacht capable of crossing the Pacific Ocean, a stable of riding horses, a private swimming pool, and a different automobile for each day of the week.

Parker also retained “interests” in New England dental clinics, which he lawfully was not permitted to own under state statutes. He held the property of the real estate, the commercial building structures, the equipment, and the good-will of the practices which were operated by hired associates. Again, we witness similar operations today within the DSO industry.

Parker also ran his own patient finance company, as well as a collection agency. “Pay for your plates as your wear them” was one marketing slogan. One hesitates to imagine a repo man taking back a set of dentures, with an outstanding balance owed Parker.

Patient financing for dental treatment is an essential element in modern dentistry. Parker was an early innovator.

It is incredibly difficult to qualify Parker as all good or all bad. Yes, Parker opened up access to care for the less advantaged, his target demographic. He made dentistry affordable through lowered cost and financing. Simultaneously, the level of care was frequently of dubious value.

He was not an elite and easily related to ordinary people, his patients.

At the same time, like P.T. Barnum, Parker utilized deception and manipulation to achieve his personal objectives, which were not always aligned in the patient’s interest.

He was unquestionably a marketing genius. However, he commonly used those means to suspect ends. People were entertained, but also deceived and could be physically harmed.

Numbers of patients reported psychological devastation and humiliation after the public display of their exodontia.

During the period before antibiotics when dental infections could easily lead to mortality, think upon a destitute patient suffering a debilitating toothache. Their only fiscally viable option for relief might be in essence, to participate as the freak exhibit of a carnival act.

Parker was an innovator not only in the aforementioned dental marketing, but also branding. This is evidenced by a line of dental hygiene products, as well as a chain of branded dental clinics. Yet, one must question intrusion of a non-disclosed third party into the doctor/patient relationship, as Parker pulled the strings remotely off-stage, for his chain of clinics.

A lineage from Parker to the DSO and franchise dental industry, deceptive and false advertising in healthcare, mega sized dental clinics, dental financing, dental marketing and branding, long-standing circumvention of a state’s dental practice act, advancements in local anesthesia, preventive measures of dental hygiene, etc. can all historically be drawn.

It all started with Painless Parker. 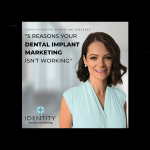 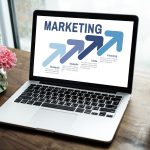