﻿INTRODUCTION
Radiosurgery is used for cutting and coagulation of soft tissue in the oral cavity. A 4.0 MHz high radio frequency (RF) signal has been found to be most ideal for these procedures, although the frequency can vary effectively from 3.0 MHz to 4.0 MHz. Electrosurgery varies from the newer radiosurgery in the frequency of the radio signal with electrosurgery being in the 1.0 MHz to 2.9 MHz range. The advancement to radiosurgery from electrosurgery yielded significantly less lateral heat to the surrounding soft tissue and hence less chance of any tissue damage. The original electrosurgical instruments were a variety of tube and transistor units that afforded a smooth incision of soft tissue as well as establishing coagulation.

RadioLASE 3
The newest generation of radiosurgical instrument is the RadioLASE 3 Surgical Generator (Ellman International). This instrument has evolved from Ellman’s medical line of surgical generators and is fully solid state. The instrument has instantaneous on/off capability and has a continuous 4 MHz of power with no drop in frequency. This unit not only performs cutting, cutting with coagulation, and hemostasis, but also offers bipolar coagulation that is excellent for establishing coagulation in areas of heavy bleeding. The unit has been designed to work with a finger-switch handpiece as well as a footpedal, giving the doctor more flexibility.

Monopolar and Bipolar Techniques
The RadioLASE 3 is designed as both a monopolar and bipolar unit all in one instrument. Monopolar radiosurgery is used for cutting and coagulating tissue with the use of a fine tungsten wire electrode. Monopolar surgery affords the doctor an easier type of incision due to the fact that only one wire is used for all procedures. A separate antenna is used to receive the RF energy from the active electrode and thus requires less power to perform the procedure. The concept of bipolar is to have 2 separate wires to perform the coagulation. These parallel wires are adjacent to one another and act as both the active and the antenna to minimize any lateral heat to the surrounding tissue. The RF signal is absorbed into the adjacent wire rather than sending it back to an antenna as in the monopolar technique, creating less chance of heat being absorbed into the surrounding tissue. Bipolar coagulation has been purposed to afford safer coagulation when in the proximity of an implant, since the RF signal is absorbed by the adjacent wire rather than the surrounding tissue.

The RadioLASE 3 offers a monopolar fully filtered waveform for microsmooth incisions as well as a monopolar fully rectified waveform which produces a fine incision with concurrent coagulation. A monopolar, partially rectified waveform is used to establish hemostasis of the soft tissue. The monopolar side of the instrument offers its own power dial as well as a fingerswitch handpiece and color-coded foot pedal. This instrument also includes bipolar capability with a separate power dial, bipolar handpiece, and color-coded foot pedal.

Radiosurgical Procedures
The radiosurgical instrument is used for all forms of surgical removal of tissue. Gingivectomy and gingivoplasty are frequently used to establish a normal gingival architecture. A gingivectomy is the removal of suprabony soft tissue. This tissue can be fibrotic or thickened or hemorrhagic and soft. The procedure is also performed around bonded restorations as well as crown preparations to establish healthy tissue with minimal bleeding. When placing crowns or veneers, preprosthetic surgery is performed to establish a more esthetic smile-line. Thickened fibrotic tissue as well as hemorrhagic tissue is removed with the fully rectified waveform and a Vari-Tip (Ellman International) straight-wire electrode, to create a microsmooth incision and concurrent coagulation and increase the field of visibility. A gingivoplasty is then performed to bevel the tissue using a round loop-shaped electrode. The tissue is allowed to heal for 2 to 3 weeks prior to crown or veneer preparation to allow for shrinkage to occur from healing of the inflamed tissue.

Postoperative Dressings
A postoperative dressing is required for all surgical procedures. In a surgical site such as the gingivectomy, several layers of tincture of myrrh and benzoin are placed. This dressing is liberally applied to the area (air-dried between layers), and a 0.12% chlorhexidene gluconate mouthrinse (such as Peridex [3M ESPE]) is prescribed twice daily. A periodontal pack (such as a COE-PAK [GC America] or Barricaid [DENTSPLY Caulk]) is placed when large areas of tissue have been removed. Any type of extensive surgical removal of tissue should have a protective dressing of the underlying tissue.

CASE REPORT
A 46-year-old male came into our office with inflamed and hyperplastic tissue on his upper teeth. It was decided that a gingivectomy would be performed to remove the inflamed tissue and to establish a normal gingival architecture (Figures 1 to 7). A RadioLase 3 radiosurgical instrument (Figure 8) was used to perform the gingivectomy. After the tissue was removed, several coats of tincture of myrrh and benzoin were applied to the tissue (air-dried between each layer) (Figure 9). A periodontal pack was the placed over the surgical site to protect the underlying tissue during the healing phase (Figure 10).

CLOSING COMMENTS
Radiosurgery is used to remove soft tissue in the dental office. The tissue is rapidly removed with the fully rectified waveform, producing a pressureless incision with coagulation. The coagulated area affords greater patient comfort due to the lack of bleeding and gives the doctor a clear field of visibility to ensure adequate removal of tissue. I perform radiosurgical gingivectomies prior to placing bonded restorations to establish a more esthetic result while increasing bond strength due to the lack of hemorrhagic contamination of the etched area. 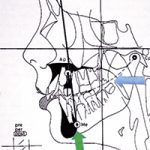