A Restorative Challenge in a Geriatric Patient

With advances in modern medicine, people are living longer. As a result, we often find unique treatment challenges in the geriatric population. There are several reasons for this. First, just as the production of tears in our eyes lessens as we age,1 salivary flow diminishes. Saliva is known to have a buffering ability, a cleansing effect, and an antibacterial action.2 Saliva also acts to moisturize oral mucosal tissues. As the production of saliva decreases with aging, the beneficial effects are not as strong as they are earlier in life.

Second, among the numerous advances of medical science, major strides have been made in the area of pharmacology. Many medications have been developed that help the population live longer. Some of the best examples are medications that help control high blood pressure as well as lipid-lowering agents, commonly referred to as statins. While having these drugs available is a positive, some of these drugs have the side effect of xerostomia, an effect that aggravates the problem of decreased salivary flow in older people.

A third problem with elderly patients is the lack of regular care. It is often difficult for an elderly person to visit a dentist. Geriatric patients may need to rely on a friend or family member to bring them to a dental office. Many times I’ve heard a geriatric patient say, “I don’t want to bother him (or her).” The person is saying he or she does not want to be a burden to the child or neighbor. In addition, I have found that elderly patients are often forced to stay away because of the need for long-term physical therapy and rehabilitation necessary as a result of accidents.

This article presents a case report in which an elderly patient taking multiple medications is treated with current materials and clinical techniques.

Margaret, the patient in this article, is 87 years old. Among her many medications are Cardi-zem (Biovail), Zocor (Merck), Lasix (furosemide tablets, Mylan Labs), and carbamazepine (Tegretol, Novartis). Cardizem is an antihypertensive medication. One of its side effects is dry mouth.3 Lasix, a potent diuretic, also lists dry mouth as a side effect.4 Carbamazepine, an analgesic for trigeminal neuralgia, lists dryness of the mouth as a side effect.5 Even with Zocor, a widely used lipid-lowering agent, dryness of skin/mucous membranes has been reported.6 Margaret did report that when she woke up during the night, her mouth felt very dry.

A full-mouth series of x-rays was taken on December 12, 2004. The last full-mouth series prior to this one was November 19, 2001. While this is only a 3-year interval, it is this author’s opinion that with patients, especially geriatric patients, who are on medications that diminish salivary flow, it is generally prudent to take a full series of x-rays closer to every 3 years rather than a longer period, such as 5 years.

Clinical examination revealed some minor gingival inflammation and no visible caries. When assessing Margaret’s x-rays, I saw huge radiolucencies on teeth Nos. 9 and 10 and some smaller radiolucencies on the proximals of tooth No. 8 (Figure 1). After looking at the x-rays of teeth Nos. 9 and 10, I couldn’t help but wonder if I had missed something during the visual exam or on her last full series. When I went back and looked at her 2001 x-rays of the area in question, there was not a single hint of caries on the films (Figure 2). When Margaret returned, I again examined her clinically, and there were no hints of cavitation in the visible areas in question (Figures 3 and 4). However, when I took an explorer and probed far subgingivally, the explorer fell in.

Although I felt better about not having missed something during my exam and reading of Margaret’s previous full series of radiographs, I couldn’t help but feel anxious about the large carious areas. Had the caries in teeth Nos. 9 and 10 penetrated into the pulp? If so, would root canal treatment be possible? While the root canal spaces looked calcified on the x-ray (Figure 1), we know that an x-ray cannot tell us exactly what we’ll see clinically. What if there was so much destruction in the roots that the teeth needed crowns? Would it be possible to create crown preparations all the way up the roots? The possibility also existed that the teeth might not be savable. What then?

From a purely technical point of view, how would I get to the carious areas in the least invasive way possible? Clearly, periodontal surgery to do crown lengthening and expose the carious roots would be easiest. However, if this were done, there would be a large aesthetic deformity because of the height to which the tissues would be raised.

Monopolar electrosurgery has been used in dentistry for more than 40 years. However, this type of electrosurgery has always had serious limitations in the oral cavity. One problem with this type of electrosurgery is the inability to touch bone. Most electrosurgical generators cut by an advancing spark, which can produce both excessive heat and spread of the current, potentially causing necrosis should bone be touched. Bipolar electrosurgery was developed for neurosurgery and microsurgery, where heat or current spread from monopolar units could cause irreversible damage.7 With bipolar cutting using the Bident system (Valley Forge Scientific, Figure 5), tissue is divided by breaking the molecular bond, and no current flows to the bone. There is no incineration of the tissues being cut. The result is a significantly safer procedure and rapid tissue healing with minimal post-operative discomfort.8

A specially designed, 4-way retractor (SEEMORE, Discus Dental, Figure 3) was placed to create adequate visibility and help Margaret keep her mouth open. Visualizing the subgingival carious areas was challenging. By using bipolar electrosurgery, we removed tissue in stages. You can see the beginning of the carious area of tooth No. 10 in Figure 6. Working carefully, we were able to obtain access to both teeth Nos. 9 and 10 and maintain a bloodless field (Figure 7). Caries was excavated as best as possible, and there did not appear to be any pulp exposures. It was highly probable that the caries had started subgingivally and progressed internally to create what were now huge defects in tooth structure.

Since accessibility to the deepest recesses of the cavities was challenging, it was decided to use a self-etching adhesive system with a known antibacterial component. This would help ensure that if any bacteria remained, they would be rendered inactive. Clearfil Protect Bond (Kuraray Dental) contains the antibacterial monomer 12-methacryloyoxydodecylpyridinium bromide, commonly referred to as MDPB. In Figure 8, the zone of bacterial inhibition can be seen on an agar plate coated with Streptococcus mutans. By using a self-etching adhesive system, we were able to eliminate the possibility of gingival bleeding due to phosphoric acid irritation and subsequent vigorous washing.

To restore the large defects, Venus microhybrid composite (Heraeus Kulzer) was chosen. Many fine composites could have been used; Venus was chosen for its handling properties and chameleon effect. Figure 9 shows the completed restoration in tooth No. 10. When all the restorations were placed, finishing with Enhance cups (DENTSPLY Caulk) and polishing with POGO cups (DENTSPLY Caulk) was accomplished (Figure 10). Final interproximal polishing was accomplished with Epitex strips (GC Corporation, Figure 11). The immediate postoperative result in teeth Nos. 8 to 10 inclusive is seen in Figures 12 and 13.

Margaret returned after a week and a half and reported no postoperative sensitivity in her teeth. She also said she had no discomfort in her gums since her last visit. Considering the amount and depth of tissue removal, it was gratifying to see how well she was healing and how the overall gingival tissue height was maintained (Figures 14 and 15).

In an attempt to minimize future destruction similar to what we saw in Margaret when she presented, it was suggested that she use a regimen of products to stimulate and replace saliva. Biotene products (Laclede) include a dry mouth chewing gum, mouth moisturizing gel, and a dry mouth toothpaste. Artificial salivas such as Glandosane Mouth Moisturizer (Kenwood Therapeutics) and Salivart Oral Moisturizer (Gebauer Chemical) were also suggested. In addition, Margaret was advised to sip little bits of water throughout the day and even when she woke up during the night.

Geriatric patients can present with unique challenges. By utilizing a combination of appropriate materials and technologies, excellent results can be achieved. It is this author’s opinion that radiographic examinations should be done more frequently for this group of patients, especially when they are on various medications with oral side effects.

Disclosure: From time to time, the author receives material and lecture support from many of the companies mentioned in this article. 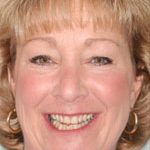