INTRODUCTION
The technique demonstrated herein has been developed over the past year and a half by the author at clinics and offices where implant treatment is provided. Though other techniques have been developed, utilizing either an allograft (maxgraft bonering [botiss biomaterials]) or an autogenous technique developed by Oncu,1 both of these techniques require additional specific instrumentation to either harvest or create an osteotomy for the graft to fit into. The technique described herein does not require additional specialized instrumentation and utilizes the existing natural anatomy of the extraction socket in order to simplify the procedure and maintain the natural anatomy of the site.

Most modern practices that provide implant treatment likely face situations requiring the extraction of a tooth with concomitant implant placement. In sites where the size of the implant is equal to or greater in size than the residual root socket, it is a straightforward procedure which will most likely not require grafting. However, since the shape of the socket will rarely be the cylindrical shape of a dental implant—and, in most circumstances, there will be a moderate-to-large gap between the implant and the walls of the socket—less of a gap in a bicuspid and more of a gap in a molar will exist.2 This gap must be grafted.

Grafting the Gap
When a dental implant is placed into a fresh extraction socket, the space between the implant periphery and surrounding bone is called the gap or jumping distance.3 This gap requires the placement of graft material to provide a framework for proper healing and the eventual osseointegration of the implant that has been placed.

The main objective of immediate implant placement is to provide an osseointegrated fixture suitable for an aesthetic and functional restoration. The bone that fills in the gap between the implant and the peripheral bone is important. In the aesthetic zone, the buccal aspect of an implant is of great concern because the buccal bony plate is usually thin, and its resorption can result in soft-tissue recession.4-6 The horizontal gap, if less than 2.0 mm, will likely fill in without any intervention by the practitioner. In fact, it has been shown that it is possible to have complete fill-in with a gap up to 4.2 mm, but it is not predictable.7 Therefore, the author will more than likely graft all immediate cases that have a gap larger than 1.0 mm.

There are many materials on the market that can be used to successfully fill this gap. Allograft, xenograft, and alloplastic materials all work, so it will come down to the clinical advantages and disadvantages of these materials, along with the handling characteristics of each. In studies comparing allograft and alloplast materials, both were equal in terms of the quantity and quality of osteoblasts, and both were the same in terms of live and dead bone.8 Allografts work well and turn over within 3 to 5 months, and xenografts take approximately 6-plus months to be resorbed.9 Allografts are available in particulate and putty forms, with the putty being easier with regard to handling properties, but have the downside of not providing much in the way of contributing to the primary stability of implants in resistance to lateral motion. The potential issue with particulates, depending on the particle size, is if the material ends up down in the osteotomy and apical to the implant. If this happens, it is possible to have the graft material prevent your implant from fully seating. Particulates also have a higher tendency to migrate from the top of the socket unless a barrier, such as a membrane or collagen plug, is used to contain it.

Alloplastic Putty Option
Alloplast Putty (Newport Biologics) is available in 0.5-, 1.0-, and 2.0-cc cylinders. The cylinder comprises a bone graft matrix that becomes a moldable putty upon hydration. This calcium phosphate-based mineral features a carbonate apatite structure similar to natural bone, combined with Collagen Type I derived from bovine Achilles tendons. The mineral particles, which are 35 to 1,000 µm in size, are dispersed within collagen fibers, forming a 3-D matrix that is fully resorbed during the natural process of bone formation and remodeling. The author usually prefers to rehydrate this material with either blood from the socket or sterile saline. The mineralized particles are bound into the matrix by the collagen and, therefore, do not migrate from the site or location where it is placed.

CASE REPORT
Diagnosis and Treatment Planning
A 55-year-old female patient presented with a fractured maxillary first bicuspid (Figure 2). She had a nonremarkable medical history. The radiograph showed a periapical lesion and a root apex that was in close proximity to the sinus floor. The pros and cons of extraction with immediate implant placement were discussed with the patient, along with the possibility of needing a sinus elevation through the socket if primary stability could not otherwise be achieved. Ultimately, the decision was made to extract the remaining root and place an immediate implant.

Clinical Protocol
After profound local anesthesia was achieved, the root was extracted atraumatically. A spade proximator and sharp-beaked 150 forceps were used to protect the thin buccal plate and to minimize trauma to the surrounding soft-tissue complex. Once the root was removed (Figure 3), the site was thoroughly curetted, with a focus on removing the residual periapical cyst. Once sound, healthy bone was encountered, the site was rinsed with sterile saline. To determine what size implant to place, a 3.5 x 13 osteotomy former (Figure 4) and a 4.3 x 13 osteotomy former (Figure 5) were placed next to the extracted root. This was a quick and easy visual procedure that determined the 4.3 x 13 implant would work best in this clinical situation. It was determined that the existing socket would work and some additional stability would be gained by placing the implant in a slightly lingualized position; thus, we would be able to avoid having to perform a sinus bump.

A high-speed handpiece with a long-shank surgical 557 bur was used to create a lingualized purchase point through the lamina dura of the socket (Figure 6). The specified drilling protocol was followed (Figure 7) to create an osteotomy preparation allowing for the placement of a 4.3 x 13 Hahn Tapered Implant (Glidewell Laboratories).

A 0.5-cc cylinder of alloplast, which had dimensions of 9 x 8 mm, was selected for this case (Figure 8). After trimming the length of the alloplast graft cylinder, a hole was created down the long axis of the cylinder with a 1.8-mm osteotome. Afterwards, the cylinder was rehydrated with sterile saline until it became pliable (Figure 9). Although an osteotome was used, any instrument that can create a hole through the material can be used. Once the graft matrix was pliable, the hole was widened. The unique physical properties of this graft material allowed the matrix to stretch. The resultant ring was placed into the site (Figure 10), and an instrument was used to assure continued patency through the middle of the graft material. The implant was then delivered through this hole in the material until it was fully seated (Figure 11). The material was pushed around the implant to fill any gaps, and the excess was pushed to the top (Figure 12). A plastic instrument was used to compress the material down around the platform of the implant after a 3-mm healing abutment was placed.

Excellent primary stability was attained with approximately 2 mm of implant beyond the socket apex and lateral contact mesial-distally by the implant in the apical one third of the socket. A seating torque value of 65 N/cm and an ISQ of 68 were achieved. Both of these values are a testament to the ability of this aggressively threaded implant to gain primary stability in most bone types. The soft tissue at the crest was undermined subperiosteally approximately 2 to 3 mm to help facilitate closure of the soft tissue against the healing abutment so a membrane would not have to be used. Finally, the site was sutured with a single, 3.0 chromic gut suture (Figures 13 and 14). The final radiograph shows the correct position of the implant and the graft material filling the voids (Figure 15).

CLOSING COMMENTS
The use of this alloplastic regenerative material has helped make grafting around an implant easier, especially when utilizing the technique shown in this case. Due to the ability of the rehydrated product to become plasticized, it will conform to the shape of the socket when laterally condensed by the insertion of an implant. By creating a “doughnut” of alloplast, the creation of voids where no graft material exists is minimized or completely eliminated. The unique combination of mineralized allograft material and collagen provides an ideal environment for bone growth and eventual osseointegration of the implant. The collagen is necessary for cellular binding, and the mineral content will maintain space, resorbing slowly enough to allow it to be replaced by host bone. This technique of grafting when placing immediate implants is simple, predictable, and will provide better treatment outcomes.

Dr. Schlesinger has been an internationally renowned implant educator for the past 11 years. He graduated from The Ohio State University College of Dentistry in 1996. After completing a General Practice Residency at the Veterans Administration Medical Center (VAMC) in San Diego, he went on to become the Chief Resident of the GPR Program at the VAMC West Los Angeles. During his time in Los Angeles, he received extensive training in oral surgery, implantology, and complex restorative dentistry. He maintained a thriving practice in San Diego for 14 years before relocating to Albuquerque to become the COO of an implant company. In 2016, Dr. Schlesinger went back into private practice, where he provides comprehensive implant treatment through multiple offices in New Mexico. He can be reached via email at chuck@thecdschlesingergroup.com.

Are You Placing Implants?

The Importance of Increasing the Success Rate: A Look at Procedures, Factors, and Clinical Practices

A Novel Approach to Grafting Around Implants 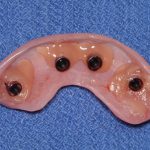