A Multidisciplinary Approach to Tooth Replacement

INTRODUCTION
The growing popularity of dental implants, along with the increased awareness of the need for adequate bone to place them, has made ridge preservation and ridge reconstruction a common necessity in dental treatment plans. However, regardless of whether implants will be placed or not, we should attempt to maintain the ridge volume after extractions in order to provide a more pleasing and natural-appearing replacement for the extracted teeth. It has been well documented in the literature that there is extensive loss of alveolar bone in the anterior ridge during the first 6 months after an extraction,1 and that bone grafting reduces the amount of bone loss.2

The following clinical scenario is a very common occurrence in dentistry. A molar was extracted years ago, and later, a fixed partial denture was placed. We are fully aware that the ridge is deficient in height and width, but since the area is not easily visualized, we place a bridge with a long pontic and feel good about restoring function for that patient. However, from an aesthetic perspective, we know it leaves much to be desired.

Now take the same situation, but instead of a molar, consider this clinical scenario for a tooth in the aesthetic zone and things change. A clinical result that presents with a long tooth and an irregular gingival line is poor publicity for you as a dentist. Fortunately, we now have many tools and techniques to do some “tissue engineering”3 to improve these deficient areas to a point where it is possible to obtain much nicer aesthetic outcomes.

CASE REPORT
Diagnosis and Treatment Planning
A 50-year-old female presented to our office with a recurrent problem with her maxillary left central incisor (Before Image). Her dental history included several unsuccessful attempts to eliminate her problem with the tooth throughout the years.

An examination and radiographs revealed an acute erythematous lesion at the labial gingival margin of the maxillary left central incisor (Figure 1) consistent with a draining periodontal abcess. A periapical radiograph (Figure 2) showed moderately severe bone loss mesial to the left central incisor that had also affected the bone level around the adjacent lateral incisor due to close root proximity. The most significant finding was evidence of total destruction of the labial plate during probing (Figure 3). Also evident were a high frenum attachment between the centrals and very large and overcontoured veneers on the central incisors. The veneers had been done in an attempt to disguise a large diastema and a tooth size-to-arch length discrepancy.

The patient was given the information necessary for informed consent. This included treatment alternatives and an agreed upon multidisciplinary approach to care that would comprise extraction of the hopeless central, guided tissue regeneration to rebuild the severely damaged ridge, and limited orthodontic therapy to close excess spaces and to create adequate room for anterior teeth of normal size and shape.4

Clinical Protocol
The first step in the treatment plan consisted of the surgical extraction of the left central incisor. This included the removal of all granulomatous and infected tissue that was sent to the lab for microscopic evaluation (Figure 4). The large defect was packed with an alloplast (NovaBone Putty [Ace Surgical]) and then covered with a resorbable collagen membrane (BioMend [Zimmer Dental]). Next, the flap was closed with mattress and interrupted black silk sutures to obtain primary closure of the flap.5 A postoperative evaluation was done 12 days later, and excellent healing had occurred (Figure 5).

The second stage of the treatment was started 4 weeks after the surgery; this included reshaping the overcontoured central to normal proportions (Figure 6), and then taking polyether impressions for clear aligners6 (Invisalign [Align Technology]). The clear aligners were being used to decrease spaces in the anterior region and to place the incisors in the best position. The laboratory prescription included a pontic space that would be filled with a composite resin to give the patient a tooth during her treatment (Figure 7). This required that each new aligner be treated similarly by filling the pontic with composite resin, which was easily done and required very little time (Figure 8).

The aligner therapy was finished as planned. Then, the last aligner was worn as a retainer for 2 months before the appointment needed to prepare the teeth for the definitive fixed bridge. (Note: The decision to go with a fixed bridge, instead of an implant, was due to the fact that the patient did not want to wear a retainer after orthodontic therapy.)

The teeth were prepared for a 3-unit bridge, and then the provisional was placed and patient approval was achieved for shade, function, and aesthetics (Figure 9). Three weeks later, the final bridge, made of layered porcelain over a zirconia framework (Lava [3M ESPE]), was delivered using a self-adhesive resin cement (RelyX Unicem 2 [3M ESPE]). Very little occlusal adjustment was necessary, and the patient was very pleased with the overall functional and aesthetic results (Figure 10 and After Image).

CLOSING COMMENTS
Pre-prosthetic ridge augmentation in the aesthetic zone when the alveolar ridge is damaged or deficient is a procedure that is well accepted by patients. This pre-restorative work allows the clinician to deliver prostheses to patients that will consistently provide the best aesthetic results possible.7

The case presented here is a little unconventional, because it combined the healing phase of the ridge graft with the aligner therapy to make treatment time shorter. The Essix-type temporary ensured that there would be no pressure on the ridge while healing. And, by the time the bridge preparations were done, 7 months had gone by, ensuring stability of the grafted area. All treatment was completed in a period of 8 months.

The only other good alternative treatment would have been to place an implant-supported crown.8 However, taking into account the compromised ridge volume, mobility, and the need for stability of the adjacent teeth, permanent retention, and the risk of further bone loss from an additional surgical procedure, the fixed partial denture was the right choice, in the author’s opinion. This case has been followed for 2 years, and it has demonstrated excellent stability in all aspects.

Dr. Boudet is a 1980 graduate of the Medical College of Virginia Commonwealth University School of Dentistry in Richmond, Virginia. He is president of the board of the Atlantic Coast Dental Research Clinic in Palm Beach County, Fla, a nonprofit organization that offers continuing education for dentists, and currently co-chairs 2 courses. He is a Diplomate of the International Congress of Oral Implantologists, and his articles have been published in several dental journals. He is in private practice in West Palm Beach, Fla, and can be contacted through his website, boudetdds.com. 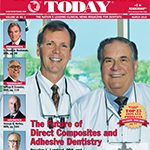 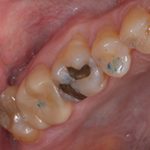