A Better Quality of Life With Implant-Retained Overdentures

﻿INTRODUCTION
The need for crowns, bridges, and full dentures is steadily increasing—in part because the generation that filled schoolrooms in the 1950s are now arriving in great numbers in their dentists’ offices. Life expectancy in America is growing, and baby boomers are known for the premium they place on quality of life—so it’s not surprising that many will consider implant-supported prostheses.
One way that dentists can meet the needs of a society in which 16% of the population is age 62 years or older,1 is to incorporate into their practice the use of small-diameter implants. Patients’ acceptance of prosthetically-driven treatment plans increases when they are offered this minimally invasive and cost-effective alternative to conventional implants.
The efficacy of small-diameter implants, along with resulting patient satisfaction, is supported by a growing body of clinical data.2-5 They have several advantages over conventional size implants: flaps or sutures are not required, so a general dentist can place them relatively easily and quickly—resulting in less pain and quicker healing for the patient; they can be placed in as little as 3 mm of bone in the buccal-lingual dimension, while the placement of conventional implants requires about 6 mm; they offer immediate loading6 due to being supported on both sides by cortical plates and because the auto-advancing design compresses and condenses the bone to help facilitate primary stability; multiple smaller-diameter (and mini-diameter) implants provide more stability than conventional implants if one loses viability; and, in addition, small-diameter implants allow more patients to move ahead with implant-supported overdentures.

CASE REPORT
Diagnosis and Treatment Planning
A 54-year-old male patient presented in good general health with a history of having had Bell’s palsy. He had all his teeth extracted more than 5 years ago due to poor oral hygiene and lack of care (Figure 1). He was dissatisfied with his dentures because they were nonretentive and thus interfering with his ability to enjoy eating and to be in public without worry. His mandibular ridge was resorbed but had enough bone width to place 2 small-diameter and 2 mini-diameter implants in the anterior mandible. The height and width of bone was insufficient to place the conventional size implant behind the mental foramen at the appropriate angle without additional surgery, indicating the need to place all 4 between the foramina (Figure 2).

The implants chosen were a one-piece design with a Zest Locator attachment (Zest Anchors). The Zest Locator provides greater patient satisfaction while offering a self-aligning feature and a lower profile than the typical o-ball attachment.

Surgical Phase
A periodontal probe was used at the original diagnosis/treatment appointment to determine the soft-tissue depth, and was reconfirmed at the surgery appointment. Ridge mapping was completed at a prior appointment, and it was determined that a flapless procedure could be performed. If complications were to occur, a surgical flap procedure could be initiated at any time. A tissue punch (OCO Biomedical) was used to gain access to the bony ridge, instead of reflecting the soft tissue back (Figure 3). A step pilot drill was then used to create the initial osteotomy for the small-diameter implant at 1,250 rpm in an implant handpiece (Novag MD20 [NOVAG]). The drill was taken to the length of the implant to be placed. A parallel pin (Salvin Dental) was placed to determine depth and to ensure that the final position of the Zest Locator would be at the correct angle (Figure 4). A final 2.8-mm drill was used to depth to complete the drilling sequence. If there had been dense bone, a 3.25-mm bone tap could have been used to create a thread pattern in the bone that would replicate the thread pattern on the implant.

The sterile vial was opened so that the contra-angle driver engaged the Locator head without touching the implant. The vial was rotated and the implant removed, with the driver keeping the implant secure to the surgical site. The small-diameter implant was placed at 20 rpm with a maximum torque of 40 Ncm. Once fully inserted, the driver was removed.
The process was then repeated on the opposite side. Careful repetition of the process ensured correct angulation and that the Locator attachments were the same distance from the front of the mouth.
The mini-dental implants were placed following the same procedure—but using a 0.8/1.6 mm diameter step drill. The drill speed was, once again, from 900 to 1,200 rpm, but drilling depth was only 4 mm. The use of parallel pins helps to ensure correct angulation. Up to 15° between implants can typically be accommodated without undue stress on the implant-attachment-overdenture system (Figures 5 and 6).
After completing the surgical phase, one appreciates finally having a mini-implant system available that incorporates the low profile Locator attachment. Patient satisfaction is greatly improved due to the self-aligning feature, and off-angle implants can be better managed by the clinician with extended-range nylon inserts (Figure 7).

Prosthetic Phase
For the prosthetic phase, a set of Locator impression caps was placed over the mini-implants. These look like champagne glasses and communicate the exact location of the one-piece Locator Implants to the dental laboratory team at Glidewell Dental Lab. An impression was taken with soft-putty (Capture [Glidewell Dental Lab]) to ensure that all pertinant landmarks were captured including land areas, retromolar pad, frenal attachmnents and, of course, the Locator impression caps.

The Locator Lab Analogs (Zest Anchors) were then inserted into the impression caps (Figure 8). A wax rim was made to record how the jaws came together and to guide the dental laboratory team where to place the denture teeth for the optimal bite (Glidewell Inclusive Dental). The author asked the dental technician to incorporate the Locator housings into the acrylic plastic base. This allowed them to try in the wax rim to verify the fit and to check for passive retention. If they had been incorrect, it would have been very easy to heat up the acrylic and to reposition the housing (Figure 9).
One of the complications that can occur with implant snap-in/snap-out dentures is fracture of the pink plastic. For this reason, they asked the dental laboratory team to incorporate a cast metal framework to increase the strength. Figure 10 shows the metal framework with the black processing rings embedded into the metalwork. These are the black “snaps” that will be replaced with a more retentive nylon locator ring.
The bite was then taken from the wax rim, the locator snaps were verified to ensure it fit over the implants, and the dental technician set denture teeth (IPN Portrait Teeth [DENTSPLY Trubyte]) in the wax for a try-in (Figure 11). After patient approval of the wax set-up, the denture was processed with an internal metal frame. At delivery, if the denture is too retentive, then different nylon rings can be placed to decrease the retention. If it is not tight enough, stiffer rings can be placed to increase it (Figure 12).
The patient was highly satisfied. He experienced less pain and quicker healing that he had expected. After he had worn the lower denture for 4 weeks, he said was relieved to be able to enjoy eating again and to be able to spend time with friends and acquaintances without the nagging worry that his loose dentures would cause him embarrassment.

CLOSING COMMENTS
This patient’s quality of life was improved through utilization of some of the best technologies available today for implant overdentures. These technologies (including small-diameter implants, the Zest Locator attachment, a metal frame incorporated into the denture, high quality composite denture teeth, and lab-processed attachments) will help general dentists successfully meet the needs of an aging population unwilling to let inadequate dentures compromise their lives.

Dr. Patel is a graduate of University of North Carolina at Chapel Hill School of Dentistry and the Medical College of Georgia/American Academy of Implant Dentistry Maxi Course. He is the cofounder of the American Academy of Small-Diameter Implants and is a clinical instructor at the Reconstructive Dentistry Institute. Dr. Patel has placed more than 2,500 mini-implants and has worked as a lecturer and clinical consultant on mini-implants for various companies. He can be reached at pareshpateldds2@gmail.com or via the Web site at dentalminiimplant.com.

Dr. Brown is a general dentist. His private practice in Fort Worth, Tex, focuses on implant and restorative care. He is president of the American Academy of Small-Diameter Implants. He is a Diplomate of the International Academy of Mini Dental Implants, and the drector of the Small-Diameter Implant Institute located in the Dominican Republic, which offers hands-on training in implant placement and restoration on patients. He offers in-office training in his facility in Texas, and lectures throughout the United States and the Dominican Republic. He can be reached at (817) 560-0414, at drstevebrown@me.com, or at stevebrowndds.com.

Dr. Nazarian maintains a private practice in Troy, Mich, with an emphasis on comprehensive and restorative care. He is a Diplomate in the International Congress of Oral Implantologists. His articles have been published in many of today’s popular dental publications. Dr. Nazarian is the director of the Reconstructive Dentistry Institute. He has conducted lectures and hands-on workshops on aesthetic materials and dental implants throughout the Untied States, Europe, New Zealand, and Australia. Dr. Nazarian is also the creator of the DemoDent patient education model system. He can be reached at (248) 457-0500 or at aranazariandds.com. 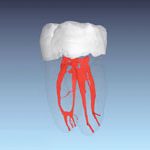 A Long and Winding Road to Full-Mouth Rehabilitation